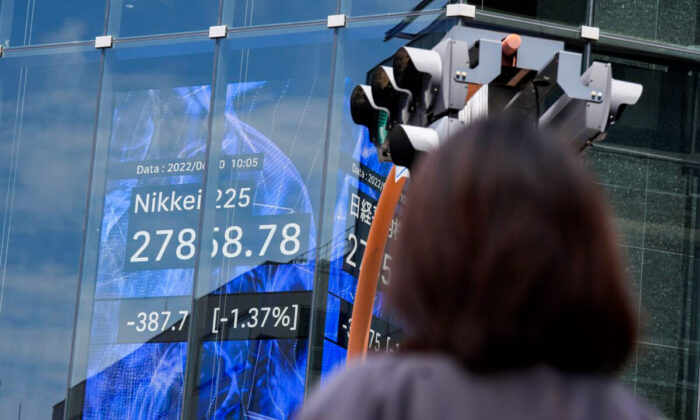 A woman stands in front of an electronic stock board showing Japan's Nikkei 225 index in Tokyo, Japan, on June 10, 2022. (Eugene Hoshiko/AP Photo)
Stocks

BANGKOK—Shares were mostly lower in Europe and Asia on Friday ahead of the release of key U.S. consumer inflation data, while U.S. futures were little changed.

The latest report on the U.S. consumer price index was due later in the day. Economists expect it to show inflation slowed a touch to 8.2 percent in May from 8.3 percent a month earlier.

Investors are hoping for signs inflation may have already peaked.

In another market-related move, the China Security Regulatory Commission issued a statement saying it has not yet evaluated and researched reviving a plan by fintech company Ant’s Group’s to conduct an initial public offering. That countered a report saying approval of the IPO was pending, but the commission said it did support share listings of “qualified platform companies” on domestic and overseas markets.

The government’s quashing of Ant’s earlier effort to launch an IPO came amid a broad crackdown on e-commerce giant Alibaba and other big technology companies that has buffeted markets, especially in Hong Kong where many such companies are traded.

On Thursday, the S&P 500 dropped 2.4 percent, and benchmarks across the Atlantic also declined when the European Central Bank said it would raise interest rates next month for the first time in more than a decade. Another hike is set for September, possibly by double July’s increase, and the central bank will also halt its bond-buying program next month.

It’s part of a growing global tide where central banks are removing the ultra-low interest rates that supported borrowing, economic growth, and stock prices through the pandemic and also flooded the markets with investments seeking higher returns. Now, central banks are focused on slowing growth to quell high inflation.

The risk is that such moves could cause a recession if they’re too aggressive. And higher interest rates tend to pull share prices lower.

A big factor in inflation is higher gasoline prices, which have been putting a tighter squeeze on both companies and households, upping the pressure on budgets. Crude oil prices are up by roughly 60 percent for the year.

As of early Friday, the AAA auto club reported the national average for a gallon of regular gas in the United States hit $4.99.