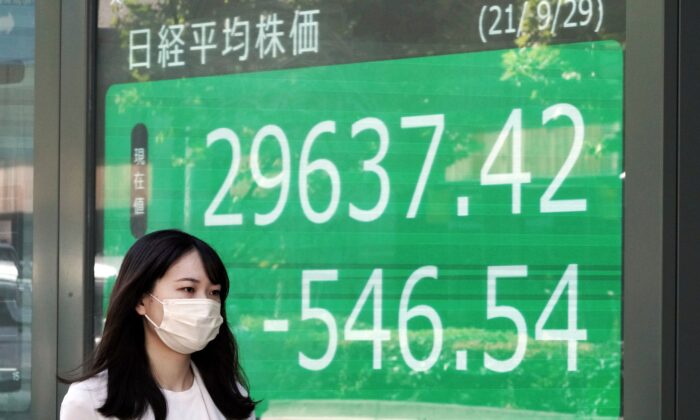 A woman wearing a protective mask walks in front of an electronic stock board showing Japan's Nikkei 225 index at a securities firm in Tokyo, Japan on Sept. 29, 2021. (Eugene Hoshiko/AP Photo)
Markets

Shares rose Wednesday in Europe after sharp declines in Asia that tracked a broad slide on Wall Street on jitters over rising prices and surging U.S. government bond yields.

A swift rise in Treasury yields is forcing investors to reassess whether prices have run too high for stocks, particularly the most popular ones. On Tuesday, the yield on the 10-year Treasury jumped to 1.54 percent, its highest level since late June. That’s up from 1.32 percent a week ago.

Early Wednesday, it had fallen back to 1.50 percent.

“What we got here is stock market that finally looks vulnerable as Treasury yields surge, oil prices look like they could easily hit $90 a barrel, and as supply chain issues show no signs of easing,” Edward Moya of Oanda said in a commentary.

U.S. futures also advanced, with the contract for the Dow industrials up 0.5 percent, while the future for the S&P 500 was 0.6 percent higher.

In Japan, the choice by the ruling Liberal Democrats of Former Foreign Minister Fumio Kishida to head the party and thus become the next prime minister came after markets had closed.

Kishida, 64, is seen as an establishment figure, though he has called for measures to address growing inequality in Japan, the world’s third largest economy.

The benchmark S&P 500 is down 3.8 percent so far this month and on pace for its first monthly loss since January after it gained nearly 16 percent since the beginning of 2021.

Bond yields started rising last week after the Federal Reserve sent the clearest signals yet that the central bank is moving closer to begin withdrawing the unprecedented support it has provided for the economy throughout the pandemic. The Fed indicated it may start raising its benchmark interest rate sometime next year and will likely begin cutting back the pace of its monthly bond purchases before the end of this year.

A rise in yields means Treasurys are paying more in interest, and that gives investors less incentive to pay high prices for stocks and other things that are riskier bets than super-safe U.S. government bonds. The recent upturn in rates has hit tech stocks particularly hard because their prices look more expensive than much of the rest of the market, relative to how much profit they’re making.

Companies are warning that supply chain problems and higher prices could crimp sales and profits. The Federal Reserve has maintained that rising inflation is temporary and tied to those supply chain disruptions as the economy recovers from the pandemic.

In other trading, U.S. benchmark crude oil gave up 58 cents to $74.71 per barrel in electronic trading on the New York Mercantile Exchange. It lost 16 cents to $75.29 per barrel on Tuesday.

Brent crude oil, the standard for international pricing, declined 60 cents to $77.75 per barrel.