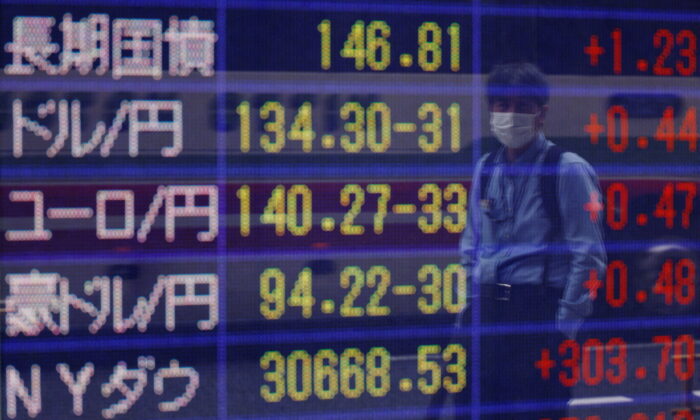 A man wearing a protective mask amid the coronavirus disease (COVID-19) outbreak, looks at a board displaying the Japanese yen exchange rate against the U.S. dollar outside a brokerage in Tokyo, Japan, on June 16, 2022. (Kim Kyung-Hoon/Reuters)
Stocks

LONDON/BEIJING—World shares hit a three-week high on Wednesday as strong U.S. corporate earnings and the expected resumption of Russian gas supply to Europe allayed fears of a recession, though the dollar hovered near two-week lows on lower U.S. rate hike expectations.

Markets still expect a large 75-basis-point interest rate rise from the U.S. Federal Reserve next week to rein in white-hot inflation. But this represents a rowback from previous expectations of 100 bps.

S&P 500 futures and Nasdaq futures both rose more than 0.4 percent, after stronger-than-expected results from U.S companies overnight including Netflix Inc.

The S&P 500 gained 2.8 percent on Tuesday while the tech-heavy Nasdaq Composite added 3.1 percent.

The euro gained 0.14 percent to $1.0236, after racking up its biggest one-day percentage gain in a month in the previous session on rising rate hike bets.

The dollar was steady at 106.67 against an index of currencies, close to two-week lows hit in the previous session.

“A further bounce in risk assets is quite possible but we think it is too early to shift from a defensive stance. The greenback will likely remain on the front foot into 3Q22.” said Sim Moh Siong, senior currency strategist at Bank of Singapore.

The Bank of Japan also delivers a policy decision on Thursday, but is not expected to make any changes to its ultra-easy stance.

A closely-watched part of the U.S. yield curve remained inverted, with the two-year yield last at 3.1979 percent, down from the previous close of 3.2310 percent.

The yield on benchmark 10-year Treasury notes stood at 2.9874 percent, compared with its close of 3.019 percent on Tuesday.

Oil prices slumped more than $1 a barrel, pressured by global central bank efforts to tame inflation and ahead of expected builds in U.S. crude inventories as product demand weakens.

By Carolyn Cohn and Stella Qiu