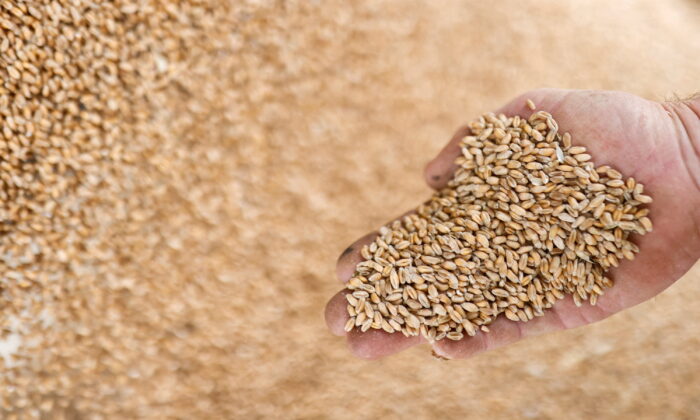 Grains of wheat in Vieillevigne near Nantes, France, on Aug. 24, 2021. (Stephane Mahe/Reuters)
Markets

PARIS—The United Nations food agency’s world price index fell for a fifth month in a row in August, further from all-time highs hit earlier this year, as a resumption of grain exports from Ukrainian ports contributed to improved supply prospects.

The Food and Agriculture Organization (FAO) said on Friday that its price index, which tracks the most globally traded food commodities, averaged 138.0 points last month versus a revised 140.7 for July.

The July figure was previously put at 140.9.

The index has fallen from a record of 159.7 in March, hit after Russia’s invasion of Ukraine. The August reading was, however, 7.9 percent higher than a year earlier.

FAO’s cereal price index fell 1.4 percent month-on-month in August, with the re-opening of Ukrainian Black Sea ports under a diplomatic deal as well as favorable wheat harvest prospects in North America and Russia weighing on prices, the agency said.

But the maize price index rose 1.5 percent last month as hot, dry weather reduced the outlook for production in Europe and the United States, it said.

In separate cereal supply and demand estimates, FAO lowered its forecast for global cereal production in 2022 to 2.774 billion tonnes from a previous projection of 2.792 billion in early July.

The cut to its prediction for 2022 cereal production was due to the weather-reduced corn prospects in the northern hemisphere, with European Union yields notably seen falling 16 percent below their five-year average, FAO said.

That would represent a stocks-to-use ratio of 29.5 percent, down from 30.9 percent in 2021/22 but still relatively high historically, FAO said.