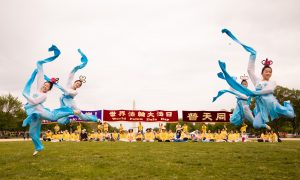 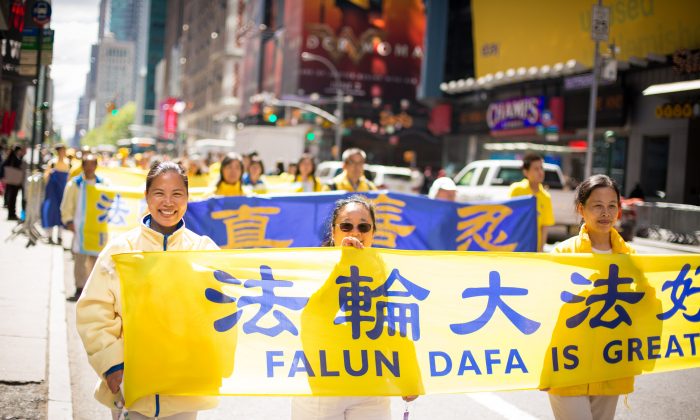 NEW YORK—Nearly a thousand Falun Dafa practitioners converged on Union Square’s north plaza on May 11 to kickstart World Falun Dafa Day festivities in New York City. It was an occasion to entertain, meditate, and introduce this practice to those passing by.

Falun Dafa, or Falun Gong, is a traditional Chinese spiritual discipline that involves four standing exercises and a sitting meditation. Core to Falun Dafa are the principles of truthfulness, compassion, and tolerance, which practitioners strive to live by.

Practitioners in New York and around the world usually hold activities around May 13 to mark World Falun Dafa Day. Falun Dafa founder Mr. Li Hongzhi first publicly taught the practice on May 13, 1992.

More than 10,000 practitioners from 57 countries and regions will be participating in various Falun Dafa events around New York from May 11 to May 14.

On a crisp Wednesday morning, over 600 practitioners dressed in yellow and blue jackets assembled in Union Square to perform Falun Dafa exercises for about two hours. The practitioners were mostly from New York and New Jersey, but were joined by others from China, Taiwan, Vietnam, Finland, Israel, Russia, and other countries.

Slightly after 12 noon, a band conductor raised her mace, and the local Tian Guo Marching Band played the first of four tunes. Musical performances by a choir, and solo instruments such as the pipa (often called the Chinese lute), guitar, keyboard, and oboe followed the band’s performance.

The musical numbers were interspersed with two performances by an energetic golden dragon dance team, as well as lion dances.

Throughout the Union Square event, practitioners positioned themselves around the plaza and passed out flyers explaining Falun Dafa.

Practitioners were also gathering signatures for a petition by the non-governmental organization Doctors Against Forced Organ Harvesting (DAFOH) which calls on the Chinese regime to stop killing Falun Dafa practitioners to supply its lucrative organ trade.

Former Communist Party leader Jiang Zemin had vowed to eliminate Falun Dafa in China, and launched a persecution campaign on July 20, 1999. Practitioners who survive the Chinese regime’s detention centers and prisons recount that they are subjected to routine blood testing. This testing has no apparent connection to any medical treatment—those detained are often subject to torture. The blood testing, researchers say, is strong evidence supporting claims that the regime is carrying out forced, live organ harvesting.

The persecution of Falun Dafa is “definitely wrong,” said Ronald Woodhead, a television series actor who walked past Union Square and signed the DAFOH petition.

Woodhead had first learned about Falun Dafa in Germany, where he lived for two years. Woodhead was deeply impressed by practitioners peacefully protesting the Chinese regime outside the Chinese consulate in Munich, where his apartment was closely situated.

“Falun Dafa harms no one and is very peaceful,” he said. “People need to support” the practice.

Andy Chen, an IT manager who works for a company near Union Square, had stopped to observe the practitioners slowly move their arms in circular motions for one of Falun Dafa’s standing exercises.

Chen had learned about the practice from the regime’s anti-Falun Dafa propaganda, which was spread both inside mainland China and overseas. After parsing the facts and spotting the loopholes in the regime’s propaganda, Chen realized what was really going on.

“The Chinese regime is only interested in materialism, money, power, and control,” said Chen, a staunch Christian who immigrated to the United States from China about two decades ago. “Of course the regime opposes Falun Dafa, a traditional, spiritual practice that awakens people’s compassion, and uplifts their morality.”

A Quarter Century of Falun Gong

Jiang Zemin’s persecution campaign persists today. But that Falun Dafa has survived the Chinese regime’s onslaught “is impressive and amounts to a genuine failure of the party’s repressive apparatus,” according to a 2017 Freedom House report on religious freedom in China.

In the twenty-fifth year since its introduction, Falun Dafa continues to thrive.

Hanh Nguyen, a practitioner from Vietnam with a pink knit scarf and ponytail, was one of several practitioners gathering signatures for the DAFOH petition at Union Square. She had picked up Falun Dafa after being introduced to the practice by a customer of her former company.

“I feel very relaxed after doing the sitting meditation,” she said. Vietnam has over 20,000 practitioners, according to Hanh.

Young practitioners have also found Falun Dafa to be very helpful in curbing the bad habits of modern living.

Roman Ponomarev, 23, learned the exercises from his father in 2007, but practiced only half-heartedly. Two years later, he decided to read “Zhuan Falun,” the main text of Falun Dafa, and was drawn to the teachings, which includes principles like first looking internally when problems arise instead of blaming others.

Within half a year, Ponomarev found himself cured of asthma. He also gave up smoking, drinking, and playing video games, and strives instead to be more truthful, compassionate, and tolerant in his daily life.

“Because there are so many practitioners in New York now, it’s a good time for New Yorkers to get a feel for the practice and find out what Falun Dafa is all about,” he said.

Thursday, May 11, 5:00pm-8:00pm: Candlelight vigil outside the Chinese consulate in New York.

Friday, May 12, 9:00 am-2:00pm: Rally at United Nations headquarters (47th Street & Second Avenue), followed by a parade from the U.N. to the Chinese consulate.

The parade will be streamed live on New Tang Dynasty Television’s Facebook page.

Saturday, May 13, 9:00am-1:00pm: A “Truth Wall” demonstration in Chinatown and Brooklyn, with exercise practices in Times Square parks across Manhattan, including Bandshell Central Park, Bowling Green Park, and Battery Park.

Caroline Zhang contributed to this article.