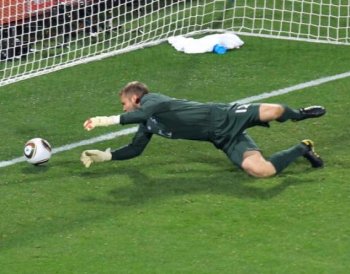 BIG MISTAKE: England's Robert Green sees the ball slip through his hands and into the net. (Martin Rose/Getty Images)
Soccer

In an enthralling encounter, England and the United States played to a 1–1 draw at Royal Bafokeng Stadium in Rustenburg on Saturday.

Captain Steven Gerrard opened the scoring in the fourth minute as the U.S. defense was caught napping. Striker Emile Heskey made a nice touch pass to Gerrard at the top of the 18-yard box. The Liverpool midfielder then cut in and nicely slotted the ball home with the outside of his right foot.

But, just over half an hour later, the U.S. got a huge break as English goaltender Robert Green committed a horrible error off Clint Dempsey’s low shot. What should have been a routine save was palmed into his own net and the U.S. were level.

“It was one of those freak things. I don’t think you can criticize the goalkeeper on that one. The ball is tricky,” said Gerrard after the game. The England captain was sure to leap to the defense of Green at the risk of sounding utterly stupid. “We need to get behind Robert and support him.”

“It’s a goal the keeper probably should’ve made a save on,” admitted Dempsey.

England was evidently deflated by the blunder although the U.S. had responded very well after going down early.

“I think it shocked us a bit,” said Gerrard. “Took us a while to get over it. I think we finished the game strong.”

The shaky U.S. defense on Gerrard’s goal was a recurring element in the game as scoring chances were aplenty. The game was also filled with errors, and broken plays. It seemed both teams didn’t have much of a game plan.

That being said, England had the better of the chances and U.S. goalkeeper (who plays for Everton in England) Tim Howard was named the Man of the Match.

Heskey probably had England’s best chance in the 50th minute but he shot straight at Howard. Heskey was replaced with Peter Crouch, albeit too late for the tall man to make much of a difference.

England did dominate the second half and came close on numerous occasions. But Oguchi Onyewu, for all the troubles the U.S. defense had, played a stellar match.

The tall defender who was playing in his first competitive match since last August with AC Milan, did an effective job on Wayne Rooney and matched up well with the powerful Heskey.

“We got a point, that’s a positive,” said Dempsey. The draw is a good result for the U.S. With winnable games coming up against Algeria and Slovenia, the U.S. has gotten through its toughest match.

The same can be said for England, although deep down, one would have to believe they’ll be less happy with the draw.

“The most important thing is not to lose. We’ve let a poor goal in,” said Gerrard.

“The target now has to be seven points,” said Gerrard.

Up next for the U.S. is Slovenia on Friday. England faces Algeria later that day. Slovenia and Algeria play Sunday’s first match to round out Group C.