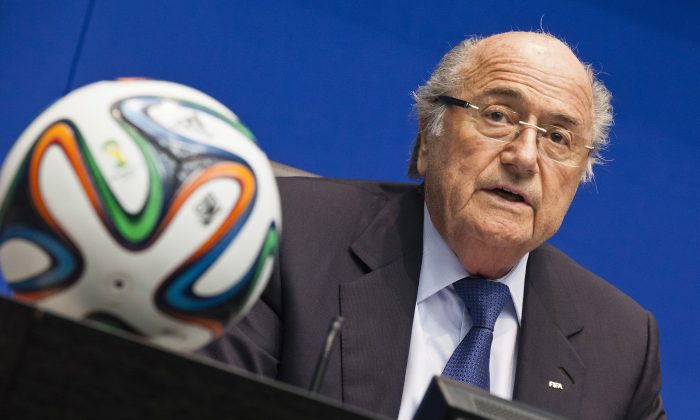 FIFA president Sepp Blatter talks during a press conference following an executive meeting of the football's world governing body at the Home of FIFA on March 21, 2014 in Zurich. A report on migrant workers' rights in Qatar ahead of the 2022 World Cup and the 2014 FIFA World Cup in Brazil was on the agenda. (MICHAEL BUHOLZER/AFP/Getty Images)
Soccer

FIFA president Sepp Blatter admitted that it was a “mistake” to pick Qatar to host the 2022 World Cup.

“Yes, it was a mistake of course, but one makes lots of mistakes in life,” said Blatter in an interview with the Swiss broadcaster RTS.

“The technical report into Qatar said clearly it was too hot but the executive committee – with a large majority – decided all the same to play it in Qatar.”

Blatter added that the tournament might be held in Qatar’s winter instead of summer instead.

FIFA released a statement clarifying that Blatter was not suggesting that he did not back Qatar as hosts:

“As explained in his answer to the journalist, the FIFA President reiterated that the decision to organise the World Cup in summer was an “error” based on the technical assessment report of the bid, which had highlighted the extremely hot temperatures in summer in Qatar,” the statement went.

“At no stage did he question Qatar as hosts of the 2022 FIFA World Cup.”

Tens of thousands of fans were flocking to the World Cup final between Germany and Argentina on Sunday as millions of Brazilians and people across South America celebrated the last game in their monthlong football festival.

Workers and supporters were already arriving at the Maracana Stadium by 9 a.m. local time, with queues trailing around the stadium seven hours head of kickoff. Security forces were on site in the early hours preparing for Brazil’s big day with more than 25,000 police and soldiers set to be on guard for the game, according to officials, the biggest security detail in Brazilian history.

Inside the stadium, world leaders including Russian President Vladimir Putin and German Chancellor Angela Merkel will witness football’s biggest match and one of sport’s great occasions alongside Brazilian President Dilma Rousseff. With such VIPs attending, Brazil was taking no chances at the very end of a tournament that has been praised as a surprising success.

Rio de Janeiro’s Copacabana beach, meanwhile, was awash in the sky blue of Argentina’s football jerseys as thousands of rowdy fans gathered hours ahead of the championship match.

Rio officials have estimated that at least 70,000 fans from Argentina are in Rio.

Javier Gonzalez traveled 40 hours by car from Buenos Aires. He and four friends are holding out hopes of finding tickets for the final — but only have $230 a piece to spend, far less than what scalped tickets are going for. But he reckons Brazilians with tickets will soon be desperate to be rid of them.

“But if they win,” he added hopefully, “we might not leave at all.”

Around the Maracana, where 74,000 spectators will cram in for the final, lines of security forces wearing camouflage uniforms and carrying rifles stood watch. Roads were closed and military helicopters buzzed overhead, with Brazilian authorities still wary that the violent protests that marred last year’s Confederations Cup warm-up event may reappear.

But Brazil was hoping to blend the serious issue of security with fun for the fans.

Across the road from the lines of military police, Argentina supporters danced and sang in a cafe, eagerly awaiting their chance to win the World Cup for the first time since Diego Maradona’s team in 1986.

German fans were filtering in, too, hoping for a fourth world title. There were also supporters wearing Colombia, Mexico, Northern Ireland and Brazil shirts, and many more.

For the host country, the football ended in disappointment with a 7-1 rout at the hands of the Germans in the semifinals, but the tournament — with one game to go — has been hailed as a success.

“We did ok, yes?” said a Brazilian walking around the outskirts of the Maracana wearing his team’s canary-yellow shirt.