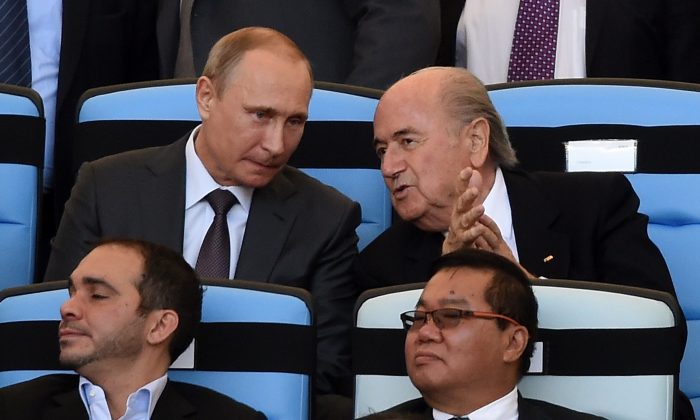 The next edition of soccer’s global showpiece will be held in Russia.

According to OddsChecker, the host is 20/1 to win the World Cup.

Check out some other countries below:

From Brazil to Russia: A Look at 2018 World Cup

MOSCOW (AP) — Brazil just barely managed to get everything ready in time for the World Cup. Russia insists it won’t have any such problems in 2018, although the country faces other issues ahead of football’s next showcase tournament — including the threat of racism and violence.

Just like in Brazil, the sheer size of Russia is set to cause logistical challenges for organizers and fans alike for the 2018 World Cup, with thousands of kilometers (miles) separating some of the host cities. But the successful staging of February’s Winter Olympics without any major organizational problems has raised Russians’ confidence in producing a high-class tournament.

After the games, Sports Minister Vitaly Mutko told parliament that Russia would avoid the “Brazilian scenario” of massive construction delays.

Of the 12 stadiums in 11 host cities, two are complete but must be reconfigured to host football games. A third, the Spartak Stadium in Moscow, will open in September. The others, including Moscow’s 81,000-capacity Luzhniki where the final will be played, are brand new projects where construction has either started or will begin this year.

The Russian government insists it will complete the stadiums on time, although Mutko told local media in March that some aspects of the design process “gave cause for disquiet” as deadlines were missed.

“That is normal working concern,” organizing committee head Alexei Sorokin told The Associated Press in a recent interview. “That does not mean we are lying down calmly and waiting for things to happen. It suggests that we are … attentive to it.”

“All of the projects are being developed pretty much at the same speed, with one or two exceptions,” architect Peter Lavelle of the Populous firm, which designed the Kazan and Sochi stadiums and is working on the Saransk and Rostov-on-Don arenas, told The Associated Press.

“We will have also stadiums built . a few weeks or months before the first whistle of the tournament,” he said, adding that rising building material costs and the ruble’s decline against other currencies over the last year are likely to cause cost overruns.

The government’s model for the new stadiums is the Kazan Arena, which opened on time last year costing around $400 million and will be a World Cup stadium. The St. Petersburg stadium, however, is a sign of what can go wrong. The 69,000-capacity arena, which will host a 2018 semifinal, is scheduled to open in 2016, far beyond its one-time finishing date of December 2008. During that time, construction has been marred by delays while costs have soared to $1.1 billion, something Prime Minister Dmitry Medvedev has labeled “disgraceful.”

But a bigger issue may be fan racism, after several incidents in Russian club football in recent years.

Monkey chants aimed at Manchester City midfielder Yaya Toure by CSKA Moscow fans during a Champions League game in November earned the Russian club the first of two UEFA racism sanctions last season, and highlighted Russian football’s problems with discrimination and violence. Last season also saw a swastika flag waved at a Spartak Moscow game and a violent pitch invasion by Zenit St. Petersburg supporters in which an opposition player was punched in the head.

“Russian football is a making certain efforts towards combatting (racism),” Sorokin said. “This thing exists everywhere, we are no exception. So we are going to do what we can.”

Some Russian clubs’ fans have shown they are “on a different planet in terms of their mindset,” said Piara Powar, head of anti-discrimination group FARE, which is monitoring Russia ahead of 2018. “We have football fans going on the rampage, looking to attack visible ethnic minorities. So in that sense, I think that the whole shebang is there and it’s getting worse.”

Last year, Russia passed its Fan Law, which introduces stadium bans for troublemakers at sports events. Powar said the law is “very stringent” but needs to be accompanied by education initiatives.

The budget for the World Cup has been set at 660 billion rubles ($19.24 billion), but the question of total costs is thorny. The official figure covers the stadiums and some stadium-related infrastructure, but not other developments such as around $20 billion of rail upgrades linked to the World Cup preparations by the Transport Ministry.

Another worry for Russia is the performance of its team, which was knocked out in the group stage in Brazil without winning a game. That poor performance has put coach Fabio Capello’s job in question, while renewed focus is being given to developing young players for 2018 and even naturalizing foreign talent, a suggestion that in recent months has been mooted in government.

However, one thing is on Russia’s side. As host, it will not need to qualify.