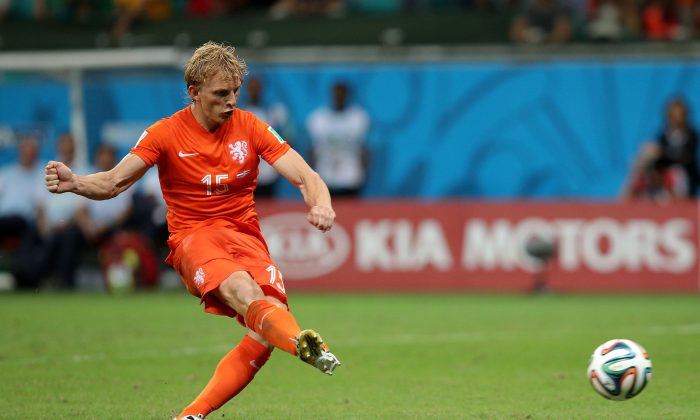 Dirk Kuyt of the Netherlands shoots and scores a goal in a penalty shootout during the 2014 FIFA World Cup Brazil Quarter Final match between the Netherlands and Costa Rica at Arena Fonte Nova on July 5, 2014 in Salvador, Brazil. (Dean Mouhtaropoulos/Getty Images)
Soccer

World Cup 2014: Dirk Kuyt Feels ‘Nothing’ in Penalty Shootouts, Says its ‘Quite Simple’

Penalties are pretty straightforward, according to Netherlands forward Dirk Kuyt.

The 33-year-old was one of Netherlands’ penalty takers against Costa Rica last week, and he calmly placed the ball in the bottom left hand corner, comfortably beating Keylor Navas.

“You only have to do one thing. Taking a penalty is really quite simple: you either miss it, or you score,” Kuyt told FIFA.com.

“To be honest, when it comes down to [taking the penalty], you don’t think about that,” Kuyt added.

“You’ve just got so much adrenaline in your body. There’s a lot of pressure though, so you try to focus only on taking the penalty.

“Basically, you feel nothing, and in that moment it’s decided whether those 120 minutes of running have all been worth it or not, Kuyt concluded.

With his approach to penalty taking, should Netherlands head to another shootout with Argentina on Wednesday, the Oranje can certainly count on Kuyt to deliver the goods.