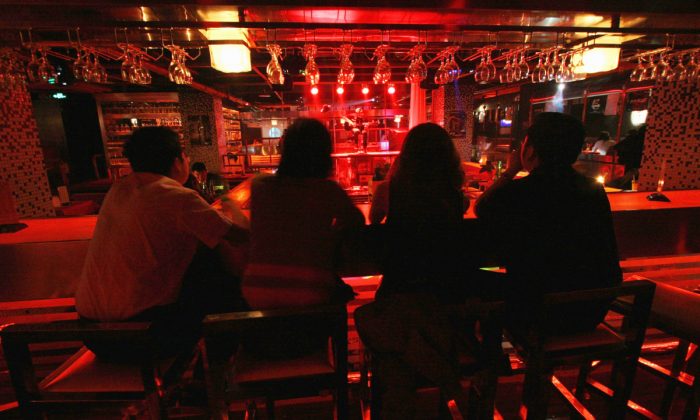 A bar at night in China in this file photo. (China Photos/Getty Images)
Social Issues

American comedian Groucho Marx once said, “When you’re in jail, a good friend will be trying to bail you out. A best friend will be in the cell next to you saying, ‘Damn, that was fun.'” What may have been one instance of this was caught on camera between two best friends after a night of drinking in China.

When the police stopped a female driver for causing a traffic accident, her friend and passenger intervened, hitting at the police, screaming obscenities, and later threatened to harm herself with a razor blade, Chinese news outlet KNews reported on Aug. 20.

The incident occurred in Zhangjiagang City of Suzhou Province, China but the report did not give a specific date.

The two were later detained.

The two women had went out for an evening of drinks, and had more than their share, according to KNews. When they planned to go home, they called for a substitute driver, a service common in China for people who are too drunk to drive, but want to take their car home. However, the two got into an argument with their driver.

As a result, the woman who owned the car, surnamed Hong, decided to drive back on her own. However, while on the road, security camera footage shows her scraping the car against the concrete pillar of a wall while making a right turn. The right rear-view mirror appears to break off in the minor collision.

The two got into a car accident later, but details were not given, according to KNews.

Soon after, the police arrived. She was given a breathalyzer, and blew a 0.26, far over the legal limit in China. Hong can be seen stumbling to keep her balance as she spoke to the police, as captured in body-cam footage. She happens to be wearing a shirt with the words “party” printed in capital letters.

Moments later, Hong and her friend, surnamed Hu, are seen sitting on the asphalt. Suddenly, Hu stands up, and charges at the officer, screaming obscenities at him, while Hong follows along.

No police retaliation was reported or shown.

Moments later, the two are seen sitting in the back of a police pick-up truck, and Hu pulls out a razor blade. She leans over Hong, and threatens to harm herself, while she holds it to her neck. However, in other unreported footage, an officer wrestled the blade away from Hu, receiving a cut in the process.

The two were then detained—Hong for drunk driving, and Hu for interfering in the investigation.