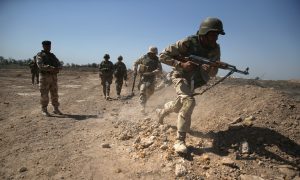 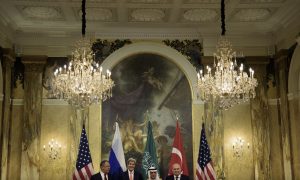 What Might Come of the Talks to End Syrian Civil War?
0

President Barack Obama in a conversation on criminal justice reform, at the White House, in Washington, D.C., on Oct. 22, 2015. (Mark Wilson/Getty Images)
US

WASHINGTON—Even when President Barack Obama sent U.S. troops back to Iraq and ordered the military to stay in Afghanistan, he insisted Syria would remain off limits for American ground forces. Now he’s crossed his own red line.

Obama’s announcement Friday that he was deploying up to 50 U.S. special operations troops into northern Syria to assist in the fight against the Islamic State group is the kind of incremental move that has defined his second-term Mideast strategy.

The U.S. military footprint in the region is growing. But each step is on a small scale, so as to reassure Americans that Obama isn’t plunging their country into another large, open-ended conflict.

While the strategy may help ease them back into the realities of war, experts and some of Obama’s political allies say his slow ramp-up may not be enough to defeat the fast-moving militants.

“Deploying a handful of U.S. special operations forces to Syria will not change this situation significantly,” said Frederic Hof, Obama’s former Syria special adviser. “It is a Band-Aid of sorts.”

Sen. Brian Schatz, D-Hawaii, said the latest escalation “is unlikely to succeed in achieving our objective of defeating IS and instead threatens to embroil the United States in Syria’s civil war.”

The military campaign against IS is nowhere near the size and scope of the wars in Iraq and Afghanistan. Obama repeatedly has used the costly and unpopular Iraq War as an example of what he’s tried to avoid.

But it was the location, not the number, that elevated the significance of his Syrian decision. It was the first time the U.S. has openly sent forces into Syria, expanding the geographic reach of Obama’s military efforts in the Middle East.

For years, the president has said Syria was precisely the kind of situation he was elected to keep the U.S. military from. Washington has no partners in the Syrian government and few good options among opposition leaders. There is no ground force that the U.S. can quickly train.

But the crisis has become unavoidable for Obama, particularly since IS crossed the border into Iraq. A civil war that Obama once could pin on Syrians to settle has now threatened to upend the entire region.

Obama’s first move was to send a few hundred U.S. troops to Iraq to train and assist local forces fighting IS. That was a return to Iraq for the U.S. military after the 2011 withdrawal, which was a fulfillment of Obama’s campaign promise to end the war he inherited from President George W. Bush.

But over the past year, the number of U.S. troops in Iraq has expanded to about 3,300. Also, the U.S. began airstrikes against IS in Iraq and Syria.

Despite killing as many as 12,000 militants, the bombing has not significantly weakened the IS’ capacity to hold territory, and foreign fighters and others have replenished the group’s ranks.

Obama had hoped a ground force trained by Americans elsewhere in the region would have complemented the strikes in Syria. But the train-and-equip program failed; Obama abandoned it this fall.

Attack Kills Dozens in Syria as Talks Begin in Vienna

The new U.S. deployment into Syria essentially replaces that effort.

The decision allows Obama, under pressure by the Pentagon and international partners to make progress against IS, to make the case that he’s trying new ways to address the crisis. The White House contends Obama isn’t backtracking on his commitment to keep U.S. troops out of Syria because the new military presence is narrow.

But to some, the White House appears to be more concerned about being able to keep that political promise than in taking more substantial action to resolve the situation.

“War has a harsh reality in that in order to have an effect you have to be present,” said Jerry Hendrix, a retired Navy flight officer and the director of the Defense Strategies and Assessments Program at the Center for a New American Security.

The White House put no timetable on how long the American forces will stay. Obama has said he expects the fight against IS in Iraq and Syria to last beyond his presidency.

Secretary of State John Kerry said Saturday he wasn’t ruling out a further U.S. escalation of the fight and that he couldn’t predict the future.

Only two weeks ago, Obama said he was reversing course and keeping American troops in Afghanistan beyond next year.

That means the president who inherited two military conflicts will likely hand his successor three.