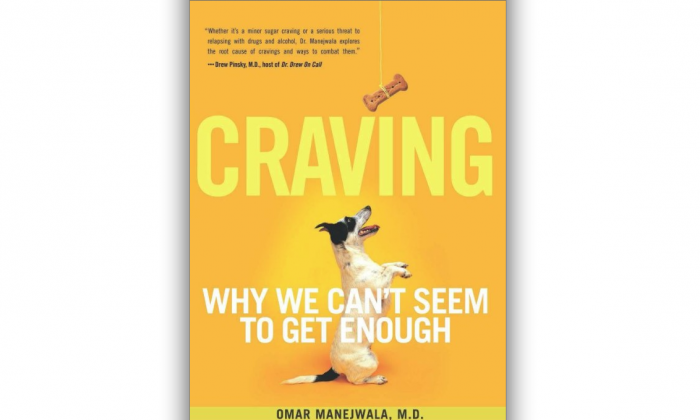 Will We Ever Stop Craving Things That Aren’t Good For Us?

An interview with Omar Manejwala, MD, Author of  Craving: Why We Can’t Seem to Get Enough

Dr. Manejwala, a psychiatrist, is the senior vice president and chief medical officer of Catasys in Los Angeles and is the former medical director at Hazelden Foundation.  He is a leading expert in addiction medicine and a public speaker who addresses the topic of addiction and compulsive behaviors.

Rosenberg: Your book draws close parallels between cravings of an alcoholic or drug addict, which can be life-threatening, and cravings for food or exercise or sex in so-called normal people. You say both originate from similar parts of the brain and both can destroy lives.

Manejwala:  Process addictions, addictions to behaviors, can wreak as much havoc as drugs and alcohols in people’s lives, as the examples in my book illustrate. A person can be so addicted to food and counting the calories and working them off at the gym, he or she is unavailable to family,  friends, and his or herself. I asked one patient how she would react to a clinical study that required her to temporarily stop exercising, and she said she would drop out. Another way in which the addictions or cravings are similar is they aren’t overcome by treating so-called “symptoms,” but in outgrowing the symptoms and learning a new way of life.

Rosenberg: Is this similar to the recovery concept that addictions can not be overcome by sheer force or willpower or a headlong assault?

Manejwala:  Yes. There’s a reason that most, if not all, diet books stress a new way of living and eating. Because the danger starts when you get to your correct weight and return to your old ways.

Rosenberg: Your book does a phenomenal job of identifying what is called in recovery circles “relapse thinking”;  someone is no longer drinking or using drugs—or is at their correct weight—and they think they have somehow gotten or regained control and are “cured.”

Manejwala: In Craving, I describe many of these biases that lead someone right back down the same path to their compulsive behavior or addiction. They include Hindsight Bias, in which someone says, “I never really had a problem to begin with,” and cognitive biases in which people think they have a new “understanding” which will stop their cravings, or they are “different” from others suffering from the same cravings.

Rosenberg: You describe in your book a doctor who continually went into rehab for alcoholism and as soon as he felt a little better, he left, against the advice of rehab professionals who felt he should remain a lot longer. Each time he thought he had things “under control”—and each time he relapsed.

Manejwala: The feeling of not being in control of our own thinking and desires is so unpleasant, we create false beliefs that we have control over them. Humans are wired to have such a strong desire to feel safe and secure, our brains will “short circuit” to give us the false belief that we are in control. This protects the self or ego—not the person’s self-esteem or identity, but the person’s ability to be an actor and enact purposeful behavior in life.

Rosenberg: You provide some very useful suggestions to overcome cravings that are also a little bit counterintuitive.

Manejwala: The things that work for cravings are not the things you would think would work for cravings. First of all, the focus can’t be on the 5 percent of someone’s life when he or she is ruled by the cravings. The focus cannot be on “treating” the symptoms, as our instant fix culture seems to emphasize. Instead, it has to be on the 95 percent of a person’s life where he or she is not craving.  Recovery from cravings is mostly about what you start doing, and much less about what you stop doing.

Rosenberg: People who are alcoholics or drug addicts can go to Twelve Step meetings and “work a program” as it is said. But how do other people fighting cravings change their lives?

Manejwala: I devote many pages to this in Craving and most of the same principles apply. First of all, a person needs to be responsible to someone else and to develop a wider, fuller life built on integrity and helping others. He or she also needs to develop human bonds based on identification, trust, and compassion.

Rosenberg: As alcoholics and addicts do in their self-groups?

Manejwala: Yes. Sharing enables people to lower their boundaries. It humanizes love.  Cravings flourish in secrecy and many people suffering from cravings do not have intimate bonds. The acceptance and love from others who truly know a person can cure that person of the shame that drives so many cravings. Love is the only thing that cures shame.