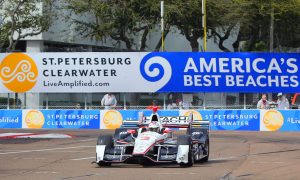 Will Power set a new lap record while winning the pole for the 2016 IndyCar St. Pete Grand Prix.
Motorsports

ST. PETERSBURG, Fla.—Penske’s Racing’s Will Power has withdrawn from the Verizon IndyCar Series Firestone Grand Prix of St. Petersburg due to a stomach illness.

Power, a two-time winner at St. Pete, would have been starting from the pole in the race.

Power will be replaced by IndyCar veteran Oriol Servia.

The Verizon IndyCar Grand Prix of St. Petersburg starts at 12:50 p.m. on Sunday, March 13. Tickets are available through the St. Pete GP website.

The race will be televised on ABC. Live timing and scoring is available on IndyCar.com.

UPDATE: Penske Racing has announced that Will Power suffered a mild concussion during his accident Friday morning, and it was the concussion which caused the symptoms originally diagnosed as a stomach illness.