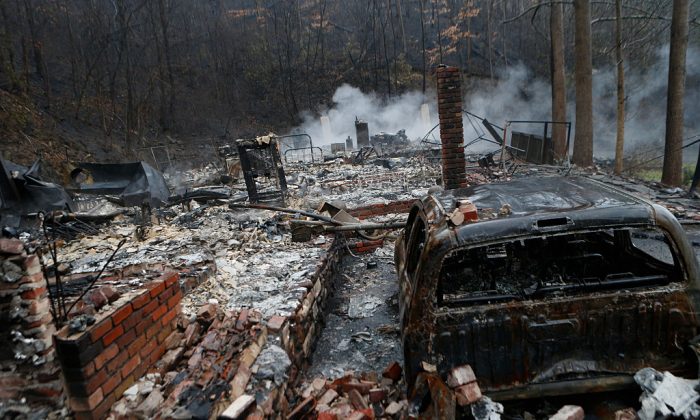 The remains of a home smolder in the wake of a wildfire in Gatlinburg, Tennessee Nov. 30, 2016. (Brian Blanco/Getty Images)
Crime and Incidents

'I forgive you'
By The Associated Press

A man whose wife and daughters were killed in a wildfire that spread through Gatlinburg says he has forgiven the two juveniles who have been accused of starting it.

The Knoxville News-Sentinel reports (http://bit.ly/2htuv1F ) Michael Reed posted an open letter on his Facebook page to the two juveniles who have been charged with aggravated arson.

Reed’s wife, Constance, and his two daughters Chloe and Lily were killed in the wildfire that spread through Gatlinburg and the surrounding area last month. Reed and his son survived.

“Forgiveness isn’t for you. It is for me. It is for my son,” Reed wrote. “It is for Constance, Chloe and Lily. It is for this community who all lost so much in this tragedy.”

Authorities say the fire started in the Great Smoky Mountains National Park and spread to the tourist town with the help of 87 mile-per-hour winds and months of drought. The fire killed 14 people and damaged more than 2,400 buildings. Local officials estimate the property damage at $500 million.

Reed told the newspaper he did not post the letter seeking recognition, but to express his feelings.

“I had to think about it and how I have raised my children,” he said. “I have raised them to be forgiving, courteous and respectful. If this was flipped and I had passed away, I wouldn’t want them to hold a grudge – to be resentful and angry.”

Authorities have said little about how they think the two juveniles started the fire. The juveniles are from Tennessee, but do not live in Sevier County where Gatlinburg is located. Officials have said state law prevents them from saying anything else about them.

Reed said he believes the juveniles charged with aggravated arson have not lived long enough “to know the consequences of their actions.”

“I always told Constance you can never appreciate heaven until you have been through hell because you have nothing to compare it to,” Reed said.