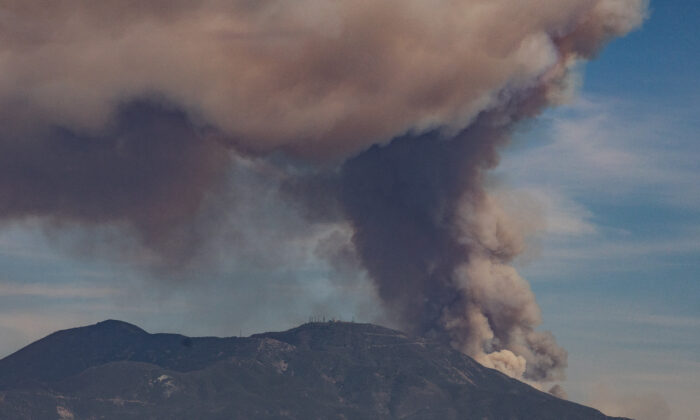 TRABUCO CANYON, Calif.—A wildfire that broke out Wednesday in the Cleveland National Forest near the Riverside-Orange County line consumed more than 400 acres within a few hours but was not immediately threatening homes or other structures.

The non-injury blaze was reported shortly before noon along Holy Jim Trail, roughly halfway between Lake Elsinore in Riverside County and Trabuco Canyon in Orange County, according to the U.S. Forest Service (USFS).

Eight engine crews and two hand crews were initially deployed to the location, encountering flames in thick vegetation, according to the USFS. Two Cal Fire air tankers and two water-dropping helicopters were called in to make runs on the brusher.

Two Cal Fire air tankers and two water-dropping helicopters were called in to make runs on the brusher, which was initially at 10 acres, but quickly expanded. By about 3 p.m., crews at the scene put the acreage at more than 400, with the fire’s advance dramatically slowed by late afternoon.

As the flames roared uphill, additional resources were requested. By mid-afternoon, at least five air tankers were working to douse the flames, according to reports from the scene.

A Riverside County Fire Department strike team, consisting of about 30 personnel, was formed in south Corona, and the crew members were expected to either hike to the fire lines or be ferried there by helicopter, according to officials.

The blaze sent a thick plume of smoke into the air, visible across most of Orange and Riverside counties. That prompted a flurry of 911 calls, many originating from Lake Elsinore and Corona. The Corona Fire Department posted statements on social media assuring residents that the vegetation fire is “not a threat to Corona.”

The OCFA posted similar messages, insisting the flames were not presenting a threat to Orange County.

While no structures were being threatened by the flames, the blaze was moving slowly toward the complex of radio/communication towers atop Santiago Peak. Crews on the scene reported that flames in that area had died down by mid-afternoon.

There was no immediate word on what might have triggered the blaze. Cleveland National Forest officials had been planning to conduct a prescribed burn on Wednesday in a different location, but it was canceled when the Jim Fire erupted.

The brusher was burning near the scene of the 2018 Holy Fire that scorched more than 23,000 acres and forced evacuations in multiple communities.