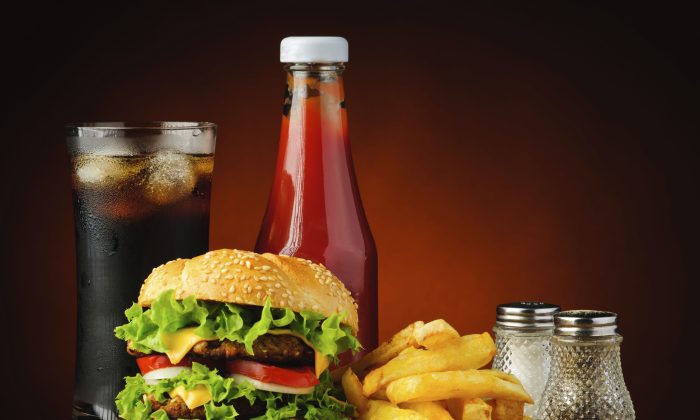 Carbohydrates make up the bulk of unhealthy and processed foods and and they are also subsidized the most. (draghicich/iStock)
Viewpoints

Why Unhealthy Food Is Cheap and Plentiful

Hint: It's not free enterprise

Every health-conscious person will tell you the reasons why the U.S. food market is such a mess. It’s fast food and corporate farming; we need to get back to local food and organics, they say. And we should have no processed foods, ever.

Let’s look more closely, based on an experience I had just the other day.

The waiter in this airport bar walked by carrying huge plates of food, piled high with fries and burgers on puffy golden buns, then another with a gleaming plate of chicken wings covered with barbecue sauce, along with more fries, then another with a massive pasta dish covered in white cheese, followed by another carrying a gigantic wedge of chocolate cake topped with ice cream and a caramel sauce.

My goodness, this place was generous with portions!

So it came time for me to order. I picked the catch of the day, which was mahi-mahi, along with some asparagus and some slaw. Sounds great! The other plates were $15. Mine was $29. Ouch. That’s annoying, but sometimes you have to put aside price to get what sounds right.

But when it came, my plate looked nothing like the other plates of food around me. It had a very small piece of fish. There were six asparagus spears. The slaw was fine but limited. There was a small relish for the fish. And that was it.

I ate it all in about six minutes. There goes 30 bucks down the throat. And I look around and see happy customers chowing down on glorious plates of food, dumping ketchup (sugar) over everything, and delighting in the excess.

Good for them. Sad for me. Or maybe not.

The Science Is Wrong

If you pay even the slightest attention to all the latest research on diet, you already know about the emerging consensus. The famous “food pyramid” of the 1970s, along with the dietary recommendations by the federal government, was completely wrong. The war on fat, the huge emphasis on grains (and corn!), the minimal place of fresh vegetables and fruits, the attack on eggs and meat, and all the rest of what was once conventional science, seems to be melting away.

Meanwhile, the American obesity problem, along with all associated health issues, is out of control. The obesity rate has doubled since the 1980s. It is the second leading cause of premature death. Some data show that nearly a third of Americans could be classified as obese.

Even our pets are developing an obesity problem. Maybe they are eating what we are eating.

You don’t have to read the science to know this. Stay abroad for a few weeks and return to the States, and you’ll notice, perhaps for the first time, that Americans look—ahem—different from other people in the world. You’ll also notice that the choices of food—I don’t mean at farmers markets or stores with a philosophy, but rather the mainstream fare—is very different in the United States.

For example, I recently spent several days in the Caribbean. The food is fresh and healthy, with all kinds of fruit, delicious veggies, and wonderful meats. Bread is available, but it plays a minor role in the overall offerings. Desserts are yummy but not that sweet. The same is true everywhere I’ve been lately, outside the United States.

In this country, by contrast, the diet is driven by the market—a deeply distorted market, where the poor choices get the subsidies and the better choices are left to face competitive cold winds.

The Economist explains: “American farm subsidies are egregiously expensive, harvesting $20 billion a year from taxpayers’ pockets. Most of the money goes to big, rich farmers producing staple commodities such as corn and soyabeans in states such as Iowa.”

The Centers for Disease Control actually funded a massive study on the whole topic. The question: What is the link between the foods that make us fat and sick and the foods that are subsidized by the federal government? The result is just about as clear as empirical science can be:

“Among the justifications for the 1973 U.S. Farm Bill was to assure consumers a plentiful supply of food at reasonable prices. Four decades later, the U.S. population is burdened by substantial obesity and cardiometabolic disease. Suboptimal diet quality is a leading factor associated with death and disability in the United States.

“Specifically, diets that are high in calories, saturated fats, salt, and sugars but low in fruits and vegetables have been implicated in the development of cardiometabolic risk factors (obesity or adiposity, elevated blood pressure, elevated lipid levels, and diabetes) and diseases.”

Many people who are curious about this relationship—actually, I would even say nearly all—explain the whole problem as tracing back to “corporate farming” and “processed foods.” Or, to put it in brief, fast food. The problem here is that this is imprecise and comes close to blaming industrial progress itself for the problem.

The real root is deeper. It is not corporations or technology. They have made it possible to feed 7.6  billion people, in complete defiance of every Malthusian prediction of disaster dating back centuries. Nor is it the method or speed of delivery. The core of the problem is the massive price distortions in the market that have been brought about by government intervention.

The power of the corn lobby, for example, is legendary. And mixed with that is the power of the sugar lobby, which keeps out imported sugar that would sell for half as much as we pay at the store, thereby incentivizing producers to seek out a substitute in corn, which turns out to make us fatter, thereby panicking do-gooders who try to ban products and limit consumption so that our bad health will stop driving up health-insurance rates.

I don’t even need to look at the ingredients of the dessert that passed by my table to know the high likelihood that the cake, ice cream, sauce, and whipped topping all contained corn at all levels. It’s actually not easy to find any mainstream American food that is not built from some corn product.

Take a tour of your local convenience store and look at the ingredients. Observe the ever-malleable presence of corn. The food you seem to be looking at is not the food you are eating.

Blame Not the Market

The market is being blamed, once again, for a problem that traces to government itself. Remarkably, all of this has happened only since the 1970s, before which there was no such thing as high-fructose corn syrup, to say nothing of corn-based gasoline. It’s one intervention piled on top of another one.

Foreign peoples find all of this mystifying. Indeed it is, until you look more deeply and see just how important the grain states are in winning elections. It turns out that the main and most valuable products generated by all this strange bad-food activity are political careers.

It’s for this reason that we have corn coming out of our ears. We have french fries stacked to the heavens. We have breads, grains, and corn syrup taking over our lives, stuffed in our animals, and porking us all up to the point of rampant disease—all made available at absurdly cheap prices to the point where eating a healthy diet seems economically irrational.

Now, to be sure, this is, as they say, a “first world problem.” For most of our 150,000 years of scraping by, humans have mostly struggled to get a bite to eat every day. It’s the No. 1 problem that has defined our existence. That we’ve somehow solved this problem is amazing. That we’ve replaced that old problem with a new problem—eating too much of the wrong kind of food—is extremely strange.

If we had a genuine free market in food—and the market is doing its best with the Amazon acquisition of Whole Foods—we would also likely see a greater alignment between what is affordable and what is actually good food for human consumption. It would be nice at least to be able to test this, starting with an end to the farm program.

Jeffrey Tucker is the editorial director of the American Institute for Economic Research. He is the author of five books, including “Right-Wing Collectivism: The Other Threat to Liberty.” This article was first published on AIER.org