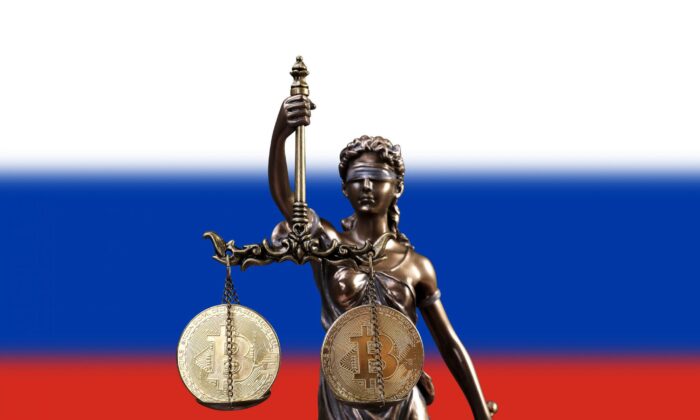 Blockchain data platform Chainalysis explored if Bitcoin can be used for mass Russian sanctions evasion in a recent blog. Here are their findings:

Chainalysis relied on a 2017 study by the National Economic Bureau, which estimated that Russian oligarchs hold nearly $800 billion in offshore funds. The platform used the number for its analysis even though it did not account for assets held within Russia.

Using a metric to measure the liquidity of a cryptocurrency called free float, Chainalysis compared BTC, Ethereum, and Tether.

Bitcoin had the lowest share of overall supply in the free float at 14 percent, but its (measured in dollars) is the largest among the three coins because of the apex coin’s large market cap.

Even so, the three assets combined have a free float of $296 billion. This amount is expected to move within a year-long period but is less than half of the $800 estimated wealth of the oligarchs.

Liquidating the large amount held by the Russian oligarchs would exert significant downward pressure on Bitcoin prices, according to Chainalysis.

The models, based on an analysis of liquidations and price movements on 19 exchanges, estimate that Bitcoin’s price would decrease by 10 percent after the sale of just $1.46 billion worth of the cryptocurrency.

The analysis noted that most cryptocurrency transactions take place within or between platforms such as exchanges. Centralized exchanges are the only places where cryptocurrency can be converted into cash, according to Chainalysis.

Since the largest cryptocurrency services are regulated, and users go through know-your-customer procedures, it would be difficult for oligarchs to move funds in stealth.

“Remember, like all transactions on the blockchain, transfers to services are publicly visible, and extremely large movements are a topic of conversation in the cryptocurrency community,” said Chainalysis.

Considering that daily inflows touched a high of $80 billion on May 19 last year, it would take 10 days of service inflows at that level for Russian oligarchs to move cryptocurrency worth $800 billion so that it can be liquidated, according to Chainalysis.

Mixer No Can Do

Mixers, a service often used by criminals to obfuscate their activities, may not help oligarchs either. Mixers take cryptocurrency from multiple users and redistribute it back to them in a random mix, with each user getting what they contributed.

However, if one user floods a mixer with funds, much of the funds returned to them would consist of the original amount they put in—defeating the very purpose of the service.

Chainalysis said mixers on average receive under $30 million worth of cryptocurrency per day, but the amount reached as high as $160 million in early December.

If Russian oligarchs were to send $160 million worth of cryptocurrency per day to mixers, it would take 5,000 days to move their total collective wealth, according to Chainalysis.

“Our findings suggest that the markets aren’t liquid enough to support the movement of the hundreds of billions controlled by sanctioned Russian oligarchs,” concluded Chainalysis.