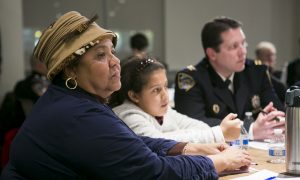 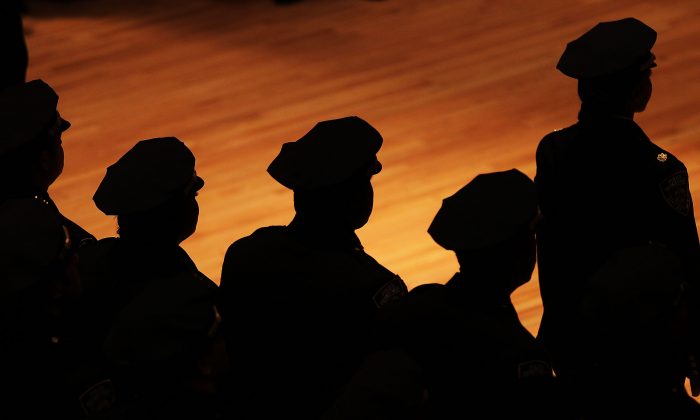 NEW YORK—It was hard to pinpoint when Glen Hochman’s mind began to unravel. Before he killed two of his teenage daughters, his three dogs, and himself during the early hours of Feb. 21, Hochman was a retired police officer who had received zero complaints during his 22-year career.

Throughout most of his career, Hochman’s job mainly consisted of pulling people over—an exasperating event for most drivers—yet those who knew him said Hochman’s kindly demeanor tended to put people at ease.

Three weeks after the murder−suicide, the Hochman’s driveway in Harrison is covered with deep layers of snow. There are no footprints, no signs of life. Their lost world is preserved inside; a row of delicately framed photographs of Hochman smiling, with his arms wrapped snugly around his brunette daughters and wife, are spread across a table behind the front door, as if to remind the family they were loved each time they entered or exited.

“He was a devoted father. That’s the scary part,” said Warren Roth, a police union lawyer who knew Hochman for more than 25 years. “I spoke with several officers close to him. No one knows why. I don’t think we’ll ever know why.”

Yet it is critical to understand why, because police suicides, particularly suicides among retired officers, happen more often than they are reported. The chilling Hochman tragedy sheds light on a long-overlooked problem with the culture of police departments: a high rate of traumatized officers and a reluctance to seek mental health care.

According to research by John Violanti, a University of Buffalo professor who specializes in police health, 15 to 18 percent of working officers in the United States have undiagnosed symptoms of post-traumatic stress disorder.

Fifteen to 18 percent of working officers in the United States have undiagnosed symptoms of post-traumatic stress disorder.

That would mean around 140,400 mentally distressed police officers are currently walking around on duty, according to statistics from the Bureau of Labor. But mental health treatments are not encouraged in most police departments.

“I’ve heard police chiefs say, ‘I’m not sure if this problem exists,'” said Ron Clark, a retired Connecticut State Police sergeant. He is currently chairman of the Badge of Life, a nonprofit that works with Buffalo University to collect data on police suicides.

And data is very hard to find.

The FBI’s main reporting mechanism, the Law Enforcement Officers Killed and Assaulted reports, do not specify when a death is a suicide.

According to Violanti’s research, around 30 percent of police suicides are wrongly classified as accidents or attributed to unknown causes.

“Police departments hide suicides because it embarrasses them,” Clark said. Also, in some states the spouse does not get benefits if an officer commits suicide. To help the family, departments often write off the officer’s death as an accident.

Yet what is more troubling than hidden numbers is the way police training enforces a stigma that therapy is for the weak, and teaches officers to suppress their emotions.

It would be easy to say that Hochman was simply a charming sociopath who, for 52 years, hid his disturbing thoughts well and deep in the fissures of his mind.

After all, friends of the family said they saw no abnormal behavior among the Hochmans in their upper-middle-class home in Harrison, a town blessed with low crime rates and private country clubs.

But Marla Friedman, a psychologist who specializes in police trauma and suicides, surmises that Hochman had two sides: one, a heroic officer who won a lifesaving award last year, the other a scarred human being who never found a way to release his emotions.

Police officers tend to keep their problems to themselves. They are wired that way from day one, programmed to be in control at all times. They are taught to find their own solutions. They need to make 100 decisions a minute, decisions that decide whether they live or die, whether their colleagues live or die.

“Eighty-five percent of the mask is developed by the academy,” said Clark, a retired Connecticut State Police sergeant. “You got to be strong, tough, never talk about anything.”

There was the Hochman who was rational and unemotional, strong and invulnerable, a superhuman who got his job done.

Then, there was the Hochman who did not know what to do when his emotions overwhelmed him.

From child pornography to decapitated bodies, disturbing images are collected and stored in officers’ minds. By the end of his or her career, an officer sees roughly 175 traumatic incidents.

By the end of his or her career, an officer sees roughly 175 traumatic incidents.

“I’ve always maintained that a police officer should not work more than 20 years,” said Andy O’Hara, a retired California Highway Patrol sergeant. “Give them a chance to salvage their lives and move on.”

O’Hara, who attempted suicide twice after retiring, began going to therapy and founded Badge of Life in 2008. He spends his days working on changing the culture in police departments and connecting with other retired officers.

“It’s a confusing thing for officers,” O’Hara said. “They’re so used to maintaining a facade, even after retirement.”

Friedman speculated that Hochman’s detachment may have been why he and his wife had discussed divorce.

“Over time the spouse becomes so frustrated that the marriage dissolves,” Friedman said. “We have officers with multiple divorces.”

If Hochman mistreated his wife at any point, then the truth would come out after a divorce. A lifetime of work to serve and protect would be marred; it could be an ultimate humiliation.

“Humiliation is really hard for officers,” Friedman said. “My guess is he did it to hurt the wife. There is no worse punishment than the loss of a child.”

Hochman shot his girls with his handgun while they were asleep—a sign that he wanted them to feel as little terror as possible. As for the hapless animals, it was likely that his wife adored the dogs, Friedman said.

Upon reading the horrific details of his murders, one sees Hochman the filicide, the monster. And he was one. There is no justification for his crime.

But perhaps Hochman wasn’t always this way. Perhaps he changed because society needed him to suppress his emotions, so he could deal with tricky gunslingers and dead bodies so that civilians won’t have to.

And that was what Hochman did when he dredged through the rubble of the Twin Towers shortly after the planes crashed on Sept. 11.

He arrived on the scene: A Lower Manhattan smeared black by ash and peppered with officers holding automatic weapons. Firetrucks rushed toward billowing fires. People watched for movement in the sky. During the first 12 hours, first responders like Hochman did not know if a third plane would hit.

“It reminded him of his military service,” said Roth, a police union lawyer. (Roth said Hochman previously served four years in the Marine Corps, where he worked with tank operations.)

“There was almost a sense of helplessness. First responders went there to save people,” Roth said. “It was a hard reality to grip with, the fact that there were so many people they could not save.”

Roth said Hochman briefly confided in him how troubled he was by his Sept. 11 experience when it first occurred. Then, he dropped the topic.

Murder−suicides are rare among officers. There were four police murder−suicides in 2012, according to a study by the International Association of Chiefs of Police.

Officers with post-traumatic stress disorder are more likely to commit suicide but not harm others.

Suicide has been a big concern for police department for decades. Officers like Hochman have access to mental health resources. Most just don’t know they do, or don’t know what will happen to their jobs if they go to therapy.

Most cities have Employee Assistant Programs (EAP), which provide information and counseling to government employees, including police officers. EAP helps refer officers to psychologists who specialize in law enforcement trauma.

“In smaller or rural areas there is often no one who does this work,” Jeff Shannon wrote in an email. Shannon is a law enforcement instructor with the City of Berkeley Police Department, where he specializes in threat assessment and police stress.

Also,  many police officers don’t trust EAP. They don’t get these referrals.

It is widely believed by officers that the psychologist will write a report and deliver it back to the police chief. If an officer has PTSD, that’s the end of his or her career.

Officers also fear that going to therapy shows a sign of weakness, regardless if there is a report or not.

“There’s been officers pushed out the door for appearing weak,” Clark said.

“[Therapy] has to be encouraged for employees in job related stress. But when it comes to mental illnesses, I’m not sure it can acclimate to police officers,” said Chief of Harrison Police Department Anthony Marraccini, who investigated the Hochman case.

Police chiefs are very careful about who gets access to a gun.

In other words, police chiefs are very careful about who gets access to a gun.

Friedman and members of Badge of Life said the problem is that chiefs have not been active in clarifying misinformation. EAP and psychologists do not actually write reports for chiefs (unless it is a case where the police department asked for counseling for a specific person). Voluntary therapy does not warrant a report.

“But as much as we explain the law of confidentiality, they don’t go if they don’t believe it,” Friedman said.

Friedman started a program called Chiefs Lead the Way. The idea is to have chiefs support and encourage officers to voluntarily check in with psychologists, and emphasize such procedures during training.

“If you don’t take these baby steps when you’re younger, it can spiral to suicide,” Clark said.

Six departments in Illinois have gotten on board so far. Friedman is looking to spread this program to departments nationally.

“Law enforcement is in its infancy of putting together programs that work and make sense,” Clark said.

Racial bias and the overuse of force are serious issues in police departments that have resulted in federal findings of systematic failures in a number of police forces across the country.

While a variety of reforms are underway, better mental health treatments for officers could help reduce problems associated with excessive use of force.

Friedman said that amygdala, two almond shaped nuclei behind the eyes that processes decisions and emotional reactions, can get damaged by the nature of the job.

The amygdala sends out distress signals when something is wrong, like when a smoke alarm goes off in one’s kitchen. Normal human beings calm down quickly when they realize there is no fire.

But for someone whose career requires the amygdala to constantly send out distress signals, neurologically, it sets them up to be reactive, sometimes overly reactive.

“You get somebody who’s really tightly wound,” Friedman said.

The current hate-the-police climate that has resurfaced after a number of recent high-profile police shootings of unarmed black men may be a harbinger of worse suicide rates to come.

During a time when New York Police Commissioner Bill Bratton is sprayed with fake blood in Times Square, when officers are killed ambush-style in a patrol car in Brooklyn, and shot at outside the Ferguson Police Department, officers will retire with more bottled frustrations.

Once they leave the police force and are left alone with their emotions, they could be a danger to themselves, and in rare cases their loved ones.

“I personally am very, very worried about that,” Friedman said. “The climate right now is so negative, we really got to fight the other way.”