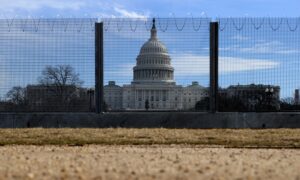 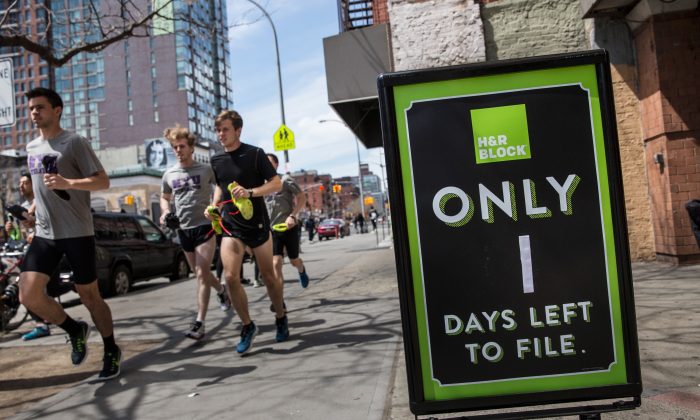 A group of men run past an H&R Block on April 15, 2015 in New York City. Today is the deadline for filing federal income taxes. (Andrew Burton/Getty Images)
Opinion

The vast majority of us will get a refund from the federal government, while the odds of an audit or worse are akin to getting struck by lightning

April 15, a day most of us dread, is here. Have you filed your taxes yet?

Economists believe most people are rational calculating machines, but many of us don’t behave rationally about filing our taxes.

Instead, most of us wait until the very last minute. Figures from the end of March suggest roughly 50 million—or one-third of all this year’s individual tax returns in the United States—will have been filed in the final two weeks before Tax Day.

This is NOT a good idea for most of us.

I experienced this procrastination during the past weekend when I was finally able to convince one of my sons to sit down and do his income taxes. He was very happy when the final tabulation showed a good-sized refund. Walking out the door, my son said if he had known it would be a refund, he would have done his taxes much earlier.

Most of Us Owe Nothing

Waiting till the last minute is strange for a number of reasons. First, the majority of people in the United States either get a refund or don’t owe the federal government any money. The graph below produced from IRS data shows the percentage of filed tax returns that are due a refund. Since the 1950s a rising number of people have overpaid. About 8 out of every 10 tax returns filed in 2013 got a refund.

The IRS also tracks the number of returns that owe no tax. Since 1950 on average 4 percent of all returns filed owed no tax. Combined this means only about 15 percent of all filed tax returns pay the government any extra money beyond what has already been taken out of paychecks or sent in throughout the year as estimated payments.

In other words, if you are procrastinating, there is an 85 percent chance you either owe nothing or will get money back, which gives you better odds than many state lotteries.

Second, if you do get a refund, typically it will be quite large. The most recent data for the 2012 tax year showed that among people who overpaid, the typical overpayment amount was about $3,000. Of this, the average person elected to receive $2,800 back and left $200 with the IRS to pay future taxes.

Third, many people procrastinate because they fear being audited. The percentage of individual returns audited in 2010 was about 1.1 percent and has since fallen to about 0.9 percent. However, these low numbers mask huge variations in the type of returns that are audited. Most of the audits happen either to millionaires or self-employed people with high income, not to the general public.

Roughly the same number of people visit emergency rooms each year after slipping or falling in a bathroom as are selected among the general public for IRS audits. Moreover, among this small group chosen for auditing, one out of every five has no changes made to their return after the IRS examination.

Fourth, some people are concerned they could go to jail because of making a tax mistake. The odds of this happening are in the same range as being hit by lightning. In the United States slightly more than 300 people are hit by lightning each year. Since 2000, fewer than 600 people a year on average go to jail for tax crimes, meaning the chance of “doing time” for tax reasons is slim indeed.

Fifth, those who fill out their returns on their own often find the task daunting. The language is convoluted, the rules are Byzantine, and tax filing requires collecting many papers and forms that don’t all arrive at the same time. The process makes many people feel confused, stupid, or inadequate.

Lastly, a Gallup Poll has found Tax Day to be one of the most stressful days of the year, which is not surprising given that many people put off doing their taxes until the last moment. Research suggests procrastination is related to stress and that procrastinators often do not finish tasks that are highly stressful.

Trouble Is, No One Knows the Truth

The question remains, why do so many people procrastinate when the odds are greatly in their favor? One reason is that almost no one knows the above statistics.

While the IRS is quick to take your money, it is slow to release data. There are a number of reasons why. Tax returns are due months after the fiscal year is over. The IRS does not get most individual tax returns for 2014 until the beginning of 2015. Then, many people and businesses ask for extensions.

This means it takes a long time before the IRS gets all the tax returns for a particular year. Additionally, the Statistics of Income, which is the IRS office that produces the data, has a small budget. Most of its money and time is spent producing information for the Treasury Department’s Office of Tax Analysis and the Congressional Joint Committee on Taxation, so that the impact of congressional and presidential proposals to change the tax system can be evaluated.

Another reason is that the tax people owe is uncertain since Congress is constantly changing the rules, and as life’s circumstances change, different tax rules apply.

After each year’s returns are collected, the IRS publishes a large book that summarizes the information found in individual tax returns. The first chapter of each book is a lengthy summary of all the recent tax law changes. Constant changes to the tax code reduce people’s ability to accurately forecast their tax liability, which makes people put off dealing with computing and filing their taxes.

Sometimes it is rational to delay. Although most people get refunds or owe no money, about 15 percent of people must pay the Federal government on April 15. The typical person in this category owes about $6,000, which is twice as large as the average refund.

It is rational for people who owe the IRS money to delay filing since it gives them a longer time to gather the funds and a longer time to receive interest on their money before incurring a late payment penalty.

In general, many people procrastinate when faced with the unknown because the unknown is scary. It is very rational to anticipate the worst when facing the mysteries of the U.S. tax code.

However, for many people, Tax Day is a time of needless worry because the majority of us get back a sizable refund. While gathering together the time and papers needed to complete your tax return is a pain, four out of five of all taxpayers will find a silver lining.

Jay L. Zagorsky is an economist and research scientist at The Ohio State University. This article was previously published on TheConversation.com.