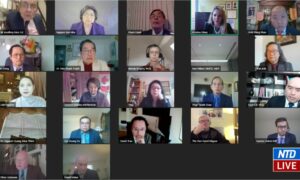 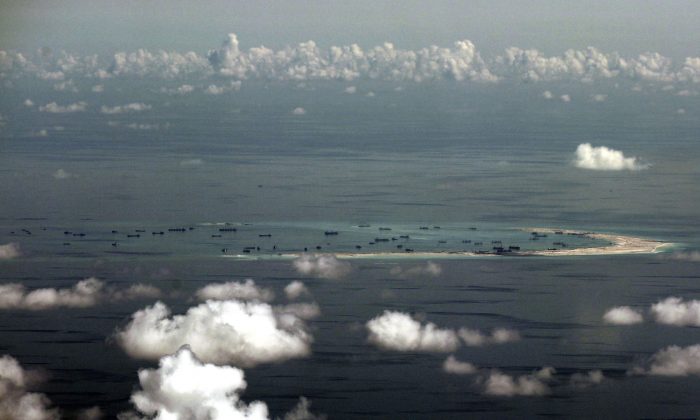 An aerial shot shows China's reclamation of Mischief Reef in the Spratly Islands in the South China Sea on May 11, 2015. (Ritchie B. Tongo/AP Photo)
China

Why Chinese Radar, Not Missiles, Is a Game Changer in the South China Sea

The likely deployment of powerful radar by China on an island in the South China Sea signifies the Chinese regime’s attempt at “effective control” over the disputed waters, the home to many competing maritime claims and crucial shipping lanes, according to an American think tank.

In a report released on Feb. 22, the Washington-based Center for Strategic and International Studies (CSIS) presents satellite images of Cuarteron Reef and highlights what looks like a high-frequency radar installation. Probable radar facilities are also seen on the Chinese outposts at Gaven, Hughes, and Johnson South reefs.

A high-frequency radar on Cuarteron would “significantly boost” China’s ability to monitor ships or planes that pass through the Straits of Malacca, a vital shipping lane between Malaysia and Indonesia, the CSIS report continues. Conversely, China’s placement of surface-to-air missiles on Woody Island in the Paracel Island chain north of Spratly—a development that engendered the making of much diplomatic noise between China and the US last week—has no strategic significance due to the People’s Liberation Army already possessing superior anti-aircraft capabilities in the area, according to a separate CSIS report.

The satellite images by CSIS were taken between Jan. 24 and Feb. 12. Cuarteron, Gaven, Hughes, and Johnson South reef are four of seven man-made islands rapidly reclaimed by China in the Spratly island chain between Brunei and Vietnam. In a congressional hearing on Feb. 23, Admiral Harry Harris, Jr. confirmed the presence of new radar on Cuarteron.

The presence of high-powered radar would be the latest twist to the drama developing in the South China Sea, a 1.3 square mile stretch of water and island chains that is being contested by Brunei, China, Malaysia, the Philippines, Taiwan, and Vietnam. While the United States has no claim in the South China Sea, it has become embroiled in the hustings in seeking to preserve freedom of passage for international trade.

According to the CSIS report, the Chinese regime’s radar facilities in the Spratlys and construction of “new runways and air defense capabilities” on other islands suggest a “long-term anti-access strategy by China—one that would see it establish effective control over the sea and airspace throughout the South China Sea.”

When asked about the possible radar facilities at a press conference on Feb. 23, Hua Chunying, a spokeswoman for China’s Foreign Ministry, claimed she was “not aware of the situation,” but maintained that the Chinese regime has the right to deploy “limited and necessary defense facilities on relevant stationed islands and reefs” in the Spratly islands according to international law.

The Chinese regime began more assertively staking its claims to the South China Sea in November 2013. Last year, a massive land reclamation project saw the creation of several artificial islands. An airplane runway that appeared to be constructed to military specifications has even appeared on one of these new islands. The regime has also appeared to have weaponized the islands, according to reports in May 2015.

United States Admiral Harris believes that the Chinese regime is priming for full control over the region. “I believe China seeks hegemony in East Asia,” Harris told lawmakers in a Feb. 23 congressional session. In a propaganda gesture that has been seen with some irony, Chinese state media has maintained all along that it is the United States—with demands for freedom of navigation—that is seeking hegemony in the region.

Harris told the Senate Armed Services Committee that China is militarizing the South China Sea, “and you have to believe in a flat earth to think otherwise.”