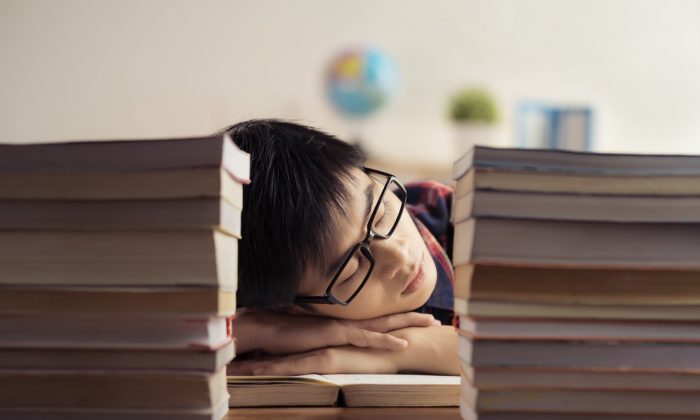 Sleep plays a fundamental role in the way we learn. Emerging evidence makes a compelling case for the importance of sleep for language learning, memory, executive function, problem solving and behaviour during childhood.

A new study that my colleagues and I have worked on illustrated how an optimal quantity of sleep leads to more effective learning in terms of knowledge acquisition and memory consolidation. Poor quality of sleep – caused by lots of waking up during the night – has also been reported to be a strong predictor of lower academic performance, reduced capacity for attention, poor executive function and challenging behaviours during the day.

Many adolescents are sleep-deprived as they gain less sleep than the average recommended level – around nine hours for this group. But due to school commitments, teenagers are required to wake up early at a set time even if they have not achieved the optimal number of hours sleep.

Along with these early start times, teenagers also experience pubertal phase delay – meaning pubertal teenagers will sleep even less due to biological factors. Combined with late night activities, this can have a significant negative effect on the quality of sleep and therefore their behaviour during the day.

Insufficient and poor quality of sleep appear to be pervasive during adolescence. These can have various consequences such as an excessive daytime sleepiness, poor diet and in turn impairments in cognitive control, risk-taking behaviour, diminished control of attention and behaviour, as well as poor emotional control.

In a recent study involving 48 students between 16 and 19-years-old recruited through an independent sixth form college in central London, my colleagues and I at the Lifespan Learning and Sleep Laboratory at UCL examined the link between sleep, academic performance and environmental factors.

Our results showed that the majority of the teenagers achieved just over seven hours of sleep, with an average bedtime at 11.37pm. Our study showed that a longer amount of sleep and earlier bedtimes – measures of sleep quantity – were most strongly correlated with better academic results obtained by the students on a number of tests taken at school. In contrast, measures that were indicative of sleep quality were mostly linked with students’ performances on verbal reasoning tests and on grade point averages on tests at school.

Why Teens Are Getting Less and Less Sleep

Our study also confirms findings from previous research showing that teenagers are getting at least two to three hours less sleep than is needed for their optimal brain development and a healthy lifestyle.

There are several modern lifestyle factors that have shown to impact on sleep. We found that consumption of energy drinks and coffee, and social media use half an hour before habitual bedtime were strongly associated with poorer sleep.

Our study has also shown that the negative impact of poor sleep on academic functioning is not always matched by a realisation of this fact by students themselves, therefore they may have little motivation to alter bad sleep habits. Unlike for adults, adolescence is a crucial time because of continual changes in the brain – so sleep is particularly important for a teenager’s health.

Conditions That Can Impact Sleep

When we examined levels of sleep biomarkers – melatonin and cortisol – in children with Williams syndrome, a rare genetic disorder, it revealed that they had elevated levels of cortisol and dampened levels of melatonin. High cortisol and low melatonin levels before bedtime were strongly linked with delayed sleep onset – taking around 50 minutes in comparison to the typical 20 minutes to fall asleep.

Since cortisol is often described as a stress hormone, high levels of this hormone before bedtime may potentially cause sleep problems including difficulty in relaxing and falling asleep. This is an important result to consider before a child is prescribed a melatonin supplement – which might not be necessary to help solve their actual sleep problem.

The effects of the sleep disturbances extend beyond the individual. Parents of children with developmental disorders often experience heightened levels of stress and sleep problems because they are kept awake by their children.

All this shows how crucial it is for teenagers to get the right amount of sleep – otherwise it could have long-term impacts on their health and on their grades.