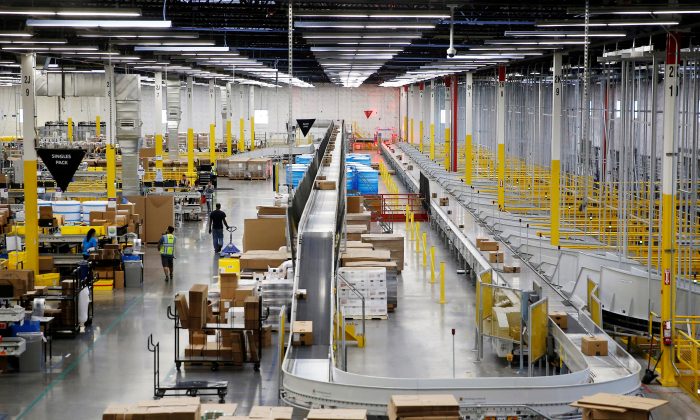 The ship sorter automatically feeds packages for delivery by speed and location to chutes connected to delivery trucks at the Amazon fulfillment center in Kent, Wash., on Oct. 24, 2018. (Lindsey Wasson/Reuters)
Companies

Why Amazon’s Higher Fulfillment Fees Could Generate $3.1 Billion in Revenue

Amazon.com Inc. has announced it will be raising its Fulfillment by Amazon (FBA) fees starting Jan. 18, 2022, a move that could generate $3.1 billion in incremental revenue.

Amazon will be raising FBA fulfillment fees by an average of 5.2 percent. The fee changes will be based on package size and weight. FBA monthly storage fees will also increase from 75 cents to 83 cents in off-peak months of January through September.

In its announcement, Amazon said it has already absorbed billions of dollars in increased costs, and the new fees are still 30 percent lower on average than if sellers were to fulfill orders via alternative shipping options. Amazon also said it has hired more than 628,000 new U.S. employees and increased its average starting wage to $18 per hour.

Bank of America analyst Justin Post said Friday that the fee hike could generate $3.1 billion in incremental revenue for Amazon and help the company offset margin pressures in 2022.

“Although an incremental $3 billion in revenue would represent less than 1 percent of Amazon’s projected $548 billion in total revenue for 2022E, the flow though to profits could be quite high,” Post said.

Yet he remains bullish on the stock given strength in Amazon’s cloud business and the likely acceleration of retail unit growth in the second half of the year thanks to expanded one-day fulfillment.

Bank of America has a Buy rating and $4,250 price target for Amazon.

Assuming Amazon’s claims that alternative fulfillment options are still far more expensive, sellers seemingly have no choice but to pay the higher fees. Given Amazon will be providing no additional services for those higher fees, almost all of the incremental revenue should be profit.