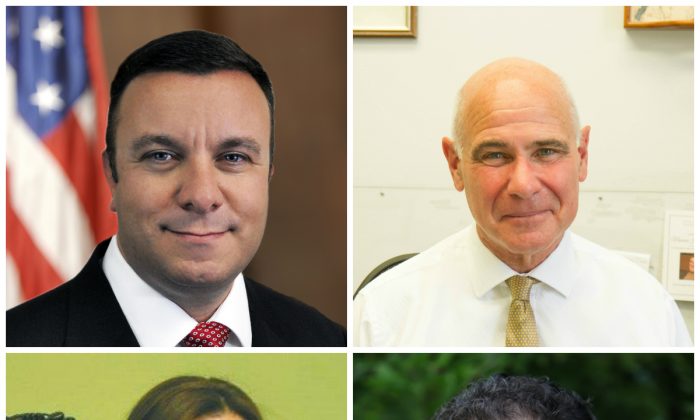 Who’s Who in the State and County Primaries

It’s election season, which means on Sept. 13, Orange County residents will head to the polls for primaries to pick state, county, and municipal-level candidates.

In the 98th Assembly District there are four candidates vying for nominations this year: Incumbent Republican Karl Brabenec of Deerpark is running against Spring Valley resident Aron Wieder for the Independence Party nomination and Town of Monroe resident John Allegro for the Republican nomination.

Weider is also up against Town of Monroe resident Krystal Serrano for the Democratic Party nomination.

Serrano, the oldest of 15 children, moved from the Bronx to Orange County four years ago. She was a  mergers and acquisitions analyst with VM Equity from 1997 to 2000 and a New York City auxiliary police officer from 2004 to 2009 and later in managed care in Orange and Rockland counties. She has been involved in organizations like the Jewish Community Relations Council of New York and the Clergy Council for New York City’s 49th precinct.

One week from today, we get the chance to make history! #WiederForAssembly pic.twitter.com/VIDQsRp4TL

Brabenec, a life-long Orange County resident, started as an assistant to former Orange County Executive Edward Diana then later served on Deerpark’s Zoning Board of Appeals (ZBA) and the Deerpark Town Board before being elected town supervisor in 2009. He served two 2-year terms as supervisor.

John Allegro, born and raised in Long Island, owned a fish and seafood business there till he moved to  Monroe in 1998. He did sales and marketing for Ricoh Business Systems for 8 years and now works as manager of sales operations at BBH Solutions in New York City. He is an executive board member of the citizen group United Monroe which sprung up to oppose the annexation of Monroe land by the Village of Kiryas Joel.

The 98th Assembly District straddles Orange and Rockland counties, and includes the City of Port Jervis, and the towns of Deerpark, Greenville, Minisink, Warwick, Monroe, Tuxedo, and portions of Ramapo.

In the county Legislature, only the 21st district, which covers the Towns of Blooming Grove, Goshen, and Wawayanda and the Village of Goshen, has an election.

Incumbent Philip Canterino, who was appointed to the position after former Democratic legislator Shannon Wong stepped down in 2015, is running against James O’Donnell for the Republican, Conservative, and Independence Party nominations.

A graduate of Pine Bush High School and Mount Saint Mary College, Canterino was a financial services manager and mortgage banker at General Motors Acceptance Corporation (GMAC, Inc.), now Ally Financial, for over 40 years. He served as a Goshen Town Board member for 23 years and a Goshen Town Planning Board member for 3 before becoming a county legislator.

O’Donnell comes from a law enforcement background, starting as a trooper with the New York State Police and working his way up to be Chief of Police of the Metropolitan Transportation Authority (MTA) in New York City. He served as the director of operations for a year then deputy county executive under Edward Diana for eight years. He resigned in 2013 “to pursue other opportunities” the county said in a press release. He also served as the executive director of the Orange County Industrial Development Agency (IDA) and a member of the Hudson Valley Economic Development Corporation.

O’Donnell and Canterino both ran for the position in 2013 in a three-way race against Wong, who won.

Brocket, a life-long Orange County resident, has been a Middletown City Court judge for the last 11 years.

For those who can’t go to the polls to vote on Sept. 13, there is the option of casting an absentee ballot. The last day to postmark an absentee ballot was Sept. 6, but in-person absentee voting is available during the week at the Orange County Board of Elections during its office hours, 9 a.m. to 5 p.m., and on Saturday, Sept. 12 from 9 a.m. to 12 p.m.