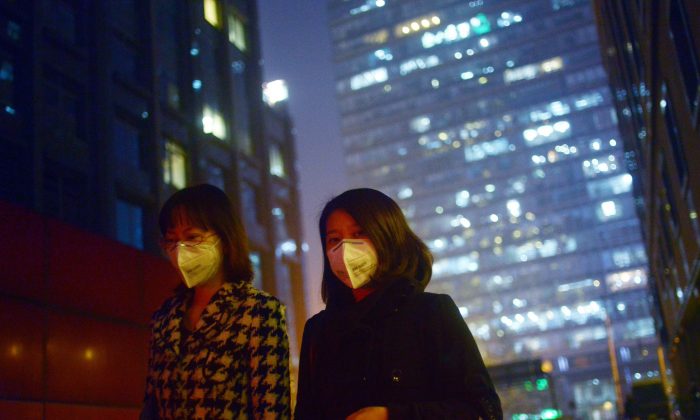 Two women wear face mask walking out of a building on a polluted day in Beijing on October 24, 2014. Wang Zhao/AFP/Getty Images)
Environment

Nearly one in four of total annual global deaths are related to the environment, said the World Health Organization (WHO) on March 15.

The report stated that 12.6 million deaths annually are consequences of living or working in an unhealthy environment.

Strokes are the number one environmentally related cause of death, killing 2.5 million people annually.

According to the WHO, environmental risk factors like air, water and soil pollution, chemical exposure, climate change, and ultraviolet radiation, contribute to more than 100 diseases and injuries.

Non-communicable illnesses—like heart disease and cancer—related to exposure to pollution, are to blame for 8.2 million deaths worldwide every year—almost two thirds of the total deaths.

The report also said that infectious diseases—like malaria and diarrhea—that are linked to bad water, sanitation and waste management, have been decreasing, although they still make up for one-third of total casualties.

The organization said access to safe water, sanitation, immunizations, insecticide-treated mosquito nets and essential medicines are reasons why those types of illnesses have declined.

Strokes are the number one environmentally related cause of death, killing 2.5 million people annually. Other causes of death that follow are ischaemic heart disease, accidental injuries such as road traffic deaths, cancers, chronic respiratory disease, diarrhoeal disease and respiratory infections.

What are the main causes of death due to the environment? Check @WHO‘s latest report: https://t.co/mBIRegTktZ pic.twitter.com/9oVPc6Bkxx

“There’s an urgent need for investment in strategies to reduce environmental risks in our cities, homes, and workplaces”, Dr. Maria Neira, director of Department of Public Health, Environmental and Social Determinants of Health at the WHO.

“Such investments can significantly reduce the rising worldwide burden of cardiovascular and respiratory diseases, injuries, and cancers, and lead to immediate savings in healthcare costs,” she continued.

WHO Declares End to Ebola Epidemic After 11,300 Deaths

The eastern hemisphere has seen most of the environmental-related deaths, especially in Asia and Africa. The report showed that there are 3.8 million deaths annually in Southeast Asia, followed by 3.5 million in the Western Pacific Region, and 2.2 million in Africa. The European region reported 1.4 million environmental-related deaths annually, and 854,000 in the Eastern Mediterranean.

When it comes to the Americas, the WHO estimated the lowest impact, with 847,000 deaths annually.

Young children under five and the older people ages 50 to 75 are the most affected.

“If countries do not take actions to make environments where people live and work healthy, millions will continue to become ill and die too young,” she added.

The WHO said in the report that during the World Health Assembly in May, it will propose a roadmap to increase the global response by the health sector to reduce the effects of air pollution.