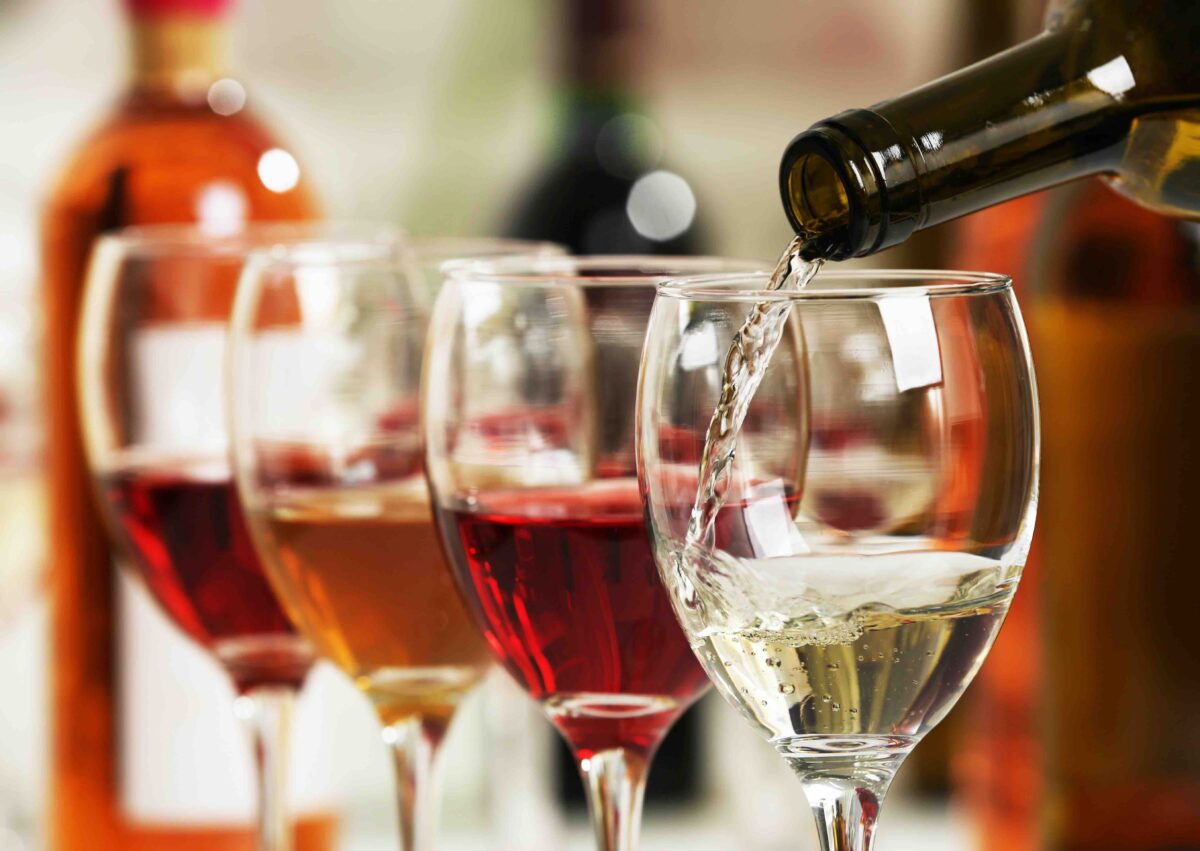 Each beverage portrayed above represents one standard drink (or one alcoholic drink equivalent), defined in the United States as any beverage containing 0.6 oz or 14 grams of pure alcohol. The percentage of pure alcohol, expressed here as alcohol by volume (alc/vol), varies within and across beverage types. Although the standard drink amounts are helpful for following health guidelines, they may not reflect customary serving sizes.

How many drinks are in common containers?

The table below shows the approximate number of standard drinks (or alcoholic drink equivalents) found in common containers.

The examples above serve as a starting point for comparison. For different types of beer, wine, or malt liquor, the alcohol content can vary greatly. Some differences are smaller than you might expect, however. Many light beers, for example, have almost as much alcohol as regular beer—about 85 percent as much, or 4.2 percent versus 5.0 percent alcohol by volume (alc/vol), on average.

Although the U.S. standard drink (alcoholic drink equivalent) amounts are helpful for following health guidelines, they may not reflect customary serving sizes. In addition, while the alcohol concentrations listed are “typical,” there is considerable variability in alcohol content within each type of beverage.

Do you drink cocktails or an alcoholic beverage not listed above? If you’re curious and willing to do a little research on your beverage’s alcohol content, you can use Rethinking Drinking’s calculators to estimate the number of U.S. standard drinks (alcoholic drink equivalents) in a cocktail or container.

What are the U.S. guidelines for drinking?

The 2020–2025 Dietary Guidelines for Americans states that adults of legal drinking age can choose not to drink or to drink in moderation by limiting intake to 2 drinks or less in a day for men and 1 drink or less in a day for women when alcohol is consumed. Drinking less is better for health than drinking more. There are some adults who should not drink alcohol, such as women who are pregnant. Adults who choose to drink, and are not among the individuals listed below who should not drink, are encouraged to limit daily intakes to align with the Dietary Guidelines. People who do not drink should not start drinking for any reason.

When is drinking in moderation still too much?

According to the 2020–2025 Dietary Guidelines for Americans, certain individuals should not consume alcohol. It’s safest to avoid alcohol altogether if you are:

In addition, certain individuals, particularly older adults, who are planning to drive a vehicle or operate machinery—or who are participating in activities that require skill, coordination, and alertness—should avoid alcohol completely.

Why do women face higher risks for alcohol-related consequences?

A growing body of evidence indicates that women who drink are at increased susceptibility to short- and long-term alcohol-related consequences, including liver disease, cardiovascular disease, neurotoxicity, and alcohol-related memory blackouts, compared to men. One reason for this is that alcohol resides predominantly in body water, and pound for pound, women have less water in their bodies than men. This means that after a woman and a man of the same weight drink the same amount of alcohol, the woman’s BAC will tend to be higher, putting her at greater risk for harm.

Other biological differences may contribute as well. While alcohol misuse by anyone presents a serious public health concern, women face alcohol-related problems sooner and at lower drinking levels than men. Women who drink are also at greater risk for developing breast cancer than women who do not consume alcohol.

What is alcohol misuse?

Alcohol misuse, which includes binge drinking and heavy drinking, increases your risk of harmful consequences, including AUD. The more drinks on any day and the more alcohol misuse over time, the greater the risk. The National Institute on Alcohol Abuse and Alcoholism (NIAAA) defines binge drinking as a pattern of drinking alcohol that brings blood alcohol concentration (BAC) to 0.08 percent—or 0.08 grams of alcohol per deciliter–or higher. For a typical adult, this pattern corresponds to consuming 5 or more drinks (male), or 4 or more drinks (female), in about 2 hours.

What are the consequences?

There is a wide range of short- and long-term consequences associated with alcohol misuse. For some individuals, any amount of drinking could be potentially harmful.

Alcohol-related blackouts. Blackouts are gaps in a person’s memory for events that occurred while they were intoxicated. These gaps happen when a person drinks enough alcohol to temporarily block the transfer of memories from short- to long-term storage—known as memory consolidation—in a brain area called the hippocampus.

Health problems. Drinking is associated with a number of health problems and can make certain chronic health problems worse. Half of liver disease deaths in the United States are caused by alcohol, and alcohol-associated liver disease is increasing, particularly among women and young people. Research has shown an important association between alcohol consumption and breast cancer—for each 10 grams of alcohol consumed (less than 1 standard drink) on an average daily basis, a woman’s chance of developing postmenopausal breast cancer increases by around 9 percent. Individuals who carry certain gene variants associated with alcohol-related flushing (e.g., the ALDH2-2 variant) are at an elevated risk of esophageal cancer from alcohol consumption. Research has also shown that alcohol misuse increases the risk of liver disease, cardiovascular diseases, depression, and stomach bleeding, as well as cancers of the oral cavity, esophagus, larynx, pharynx, liver, colon, and rectum. People who misuse alcohol may also have problems managing conditions such as diabetes, high blood pressure, pain, and sleep disorders. And people who misuse alcohol are more likely to engage in unsafe sexual behavior, putting themselves and others at risk for sexually transmitted infections and unintentional pregnancies.

Why is being able to “hold your liquor” a concern?

For some people who drink, it takes quite a few drinks to “get a buzz” or feel relaxed, and they may be less likely to show signs of intoxication compared to others. This is sometimes called being able to “hold your liquor” or “drink someone under the table.” Often these individuals are unaware that their body’s lower response to the intoxicating effects of alcohol isn’t protection from alcohol problems but instead is a reason for caution.

These individuals tend to drink more, socialize with people who drink a lot, and develop a tolerance to alcohol (i.e., it takes more and more alcohol to feel or act intoxicated). As a result, they have an increased risk for developing AUD. Someone who misuses alcohol, especially over the long-term, can experience permanent liver, heart, or brain damage. And all people who drink, regardless of the amount, need to be aware that critical decision-making abilities and driving-related skills are already diminished long before a person shows physical signs of intoxication.

Birth defects. Prenatal alcohol exposure can result in brain damage and other serious problems in babies. The effects are known as fetal alcohol spectrum disorders, or FASD, and can result in lifelong physical, cognitive, and behavioral problems. Because there is no known safe level of alcohol for a developing baby, women who are pregnant or might be pregnant should not drink.

Alcohol use disorder (AUD). Please see the box below for a definition of AUD. Some signs of AUD are continuing to drink even though it is causing trouble with your family or at work, drinking more than you intended, having to drink more than before to get a desired effect, being unable to stop drinking after repeated attempts, or continuing to drink despite negative consequences. Signs of AUD may also include drinking to alleviate negative emotions such as feeling “low,” anxious, uneasy, unhappy, unwell, dissatisfied with life, or other negative emotions that were caused or worsened by alcohol misuse. Learn more about the symptoms of AUD. Having any of these symptoms may be a cause for concern. The more symptoms one has, the more urgent the need for change.

Beyond these physical and mental health risks, frequent alcohol misuse also is linked with personal problems, such as losing one’s driver’s license or having relationship troubles.

AUD is characterized by an impaired ability to stop or control alcohol use despite adverse social, occupational, or health consequences. It is a spectrum disorder and can be mild, moderate, or severe, and it encompasses the conditions that some people refer to as alcohol abuse, alcohol dependence, or the colloquial term alcoholism. AUD can cause lasting changes in the brain that make patients vulnerable to relapse. The good news is that no matter how severe the problem may seem, most people with AUD can benefit from treatment with behavioral therapies, medications, or both.

What are the symptoms of alcohol use disorder (AUD)?

Having even a couple symptoms—which you might not see as trouble signs—can signal a drinking problem. It helps to know the signs so you can make a change early. Doctors diagnose AUD when a patient has two or more of the symptoms listed below. AUD can be mild (the presence of two to three symptoms), moderate (the presence of four to five symptoms), or severe (the presence of six or more symptoms). See if you recognize any of these symptoms—or others, such as feeling low, dysphoria, or malaise—in yourself. And don’t worry—even if you have symptoms, you can take steps to reduce your risk of AUD and other alcohol-related consequences. (For more information about AUD, see What Are the Consequences?)

In the past year, have you:

If you don’t have any symptoms, then staying within the limits provided in the 2020—2025 Dietary Guidelines for Americans could reduce your chances of having problems in the future. If you do have any symptoms, then alcohol may already be a cause for concern. The more symptoms you have, the more urgent the need for change. A healthcare professional can look at the number, pattern, and severity of symptoms to see whether AUD is present and help you decide the best course of action.

Note:
The questions listed above are based on symptoms of AUD in the American Psychiatric Association’s Diagnostic and Statistical Manual (DSM) of Mental Disorders, Fifth Edition. The DSM is the most commonly used system in the United States for diagnosing mental health disorders.

Are you ready to change your drinking?

If so, choose whether to cut down or quit and make a change plan. Don’t be surprised if you continue to have mixed feelings. You may need to remake your decision several times before becoming comfortable with it.

If youʾre not yet ready, consider these suggestions in the meantime:

To cut down or to quit …

If you’re considering changing your drinking, you’ll need to decide whether to cut down or quit. It’s a good idea to discuss different options with a healthcare professional, a friend, or someone else you trust.

Please note, when someone who has been drinking heavily for a prolonged period of time suddenly stops drinking, the body can go into a painful or even potentially life-threatening process of withdrawal. Symptoms can include nausea, rapid heart rate, seizures, or other problems. Seek medical help to plan a safe recovery. Doctors can prescribe medications to address these symptoms and make the process safer and less distressing.

Quitting is strongly advised if you:

If none of the conditions above apply to you, then talk with your doctor to determine whether you should cut down or quit based on factors such as:

If you choose to cut down, see the 2020–2025 Dietary Guidelines for Americans and seek advice from a healthcare professional if needed.