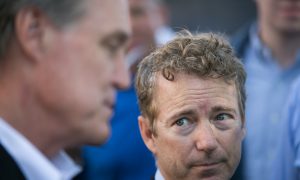 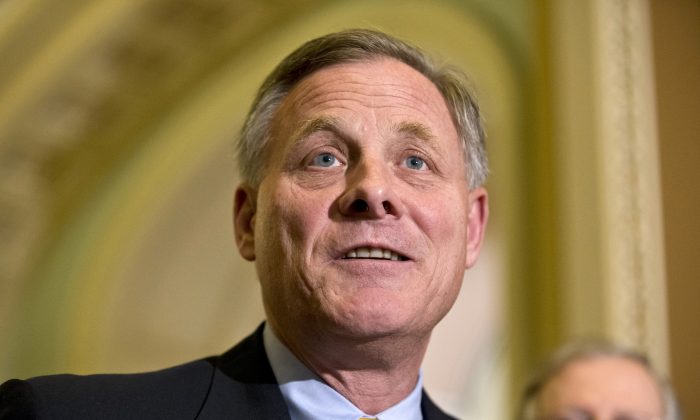 Sen. Richard Burr, R-N.C. speaks during a news conference on Capitol Hill in Washington on June 4, 2013. With Republican control of the House and Senate tantalizingly close on Nov. 4, 2014, leading Republicans are turning to a matter often overlooked in campaigns: how to actually govern. "We have to prove in two years the Republican Congress can govern," says Burr. (AP Photo/J. Scott Applewhite)
Midterm Elections

What Will Republicans Do If They Control Congress?

WASHINGTON—Republican control of the House and Senate seems tantalizingly close, so leading Republicans are turning to a matter often overlooked in campaigns: how to actually govern.

They say it will be crucial to show the GOP can legislate, lead and solve problems after years of lobbing political grenades at President Barack Obama and Senate Democrats.

If they add Senate control to their House dominance, Republicans say they will pass some bills that Obama is sure to veto, as they try to highlight their ideological differences with Democrats. But they also will push for changes in taxes, trade, regulations and other policies that both parties might accept.

“We have to prove in two years the Republican Congress can govern,” said Sen. Richard Burr, R-N.C.

Republicans know their new majority might last only two years — assuming, that is, they first obtain it this fall by picking up at least six net seats, as many predict they will. The 2016 Senate election map is far more favorable to Democrats. The contest to replace the term-limited president will add further distractions and uncertainty.

In interviews, GOP senators talked at times of an ambitious conservative push for fewer regulations, lower taxes and other long-held priorities. But they also outlined more pragmatic, modest agendas that might avoid Obama’s veto and the filibuster powers Senate Democrats will hold even if they’re consigned to the minority.

There was virtually no talk of balancing the budget, repealing Obama’s health care law or achieving similar GOP campaign pledges that prove politically impossible in Washington. These senators noted that even small achievements will require levels of bipartisanship rarely seen these days.

“It’s very possible to get a number of things done if the president is willing to come to the table, and I believe he will,” said Sen. Rob Portman, R-Ohio.

Significant numbers of Democrats and Republicans have shown interest in all these ideas, he said, and “we should focus on where we can find common ground.”

Yet these proposals, not to mention more ambitious ones, face strong pockets of resistance, mainly but not entirely from the political left.

Many environmentalists strongly oppose the Keystone XL pipeline, which would carry crude oil from Canada to Texas. Obama has blocked it, but several congressional Democrats support it.

As for lowering the corporate tax rate, the parties repeatedly have failed to resolve several issues, including where to set the new rate, how to tax U.S. companies’ overseas profits and which tax loopholes to close in exchange for a lower rate.

Prominent members of both parties say a GOP-controlled Congress could open the way to major trade deals with China, Japan and Europe. Obama has requested the power to negotiate trade agreements that Congress can approve or reject, but not cripple with amendments.

But some labor unions and Democrats oppose enhanced negotiating clout for the White House.

Republican Sen. Bob Corker of Tennessee hopes a GOP-run Senate would end the stalemate over trade and several other issues. “Congress would be speaking with one voice,” he said, and Republicans “would have to be in a governing mode.”

Corker hopes a Republican Congress could persuade Obama to loosen regulations and promote energy projects including the Keystone pipeline. But he said he worries that environmentalists, labor unions and other Democratic-leaning groups still hold too much sway.

“I’ve found him to be so afraid of his base,” Corker said.

Sen. Lindsey Graham, R-S.C., says leaders of both parties must be willing to defy key supporters, and even risk their political careers, to end government gridlock.

With his re-election virtually assured, Graham has told business leaders he wants Congress to improve roads and bridges and to shore up entitlement programs such as Social Security and Medicare, among other things. That will require ending some tax breaks and finding new sources of revenue, which is anathema to many Republicans, he said.

“I’m willing as a Republican to violate some of the pledges we’ve all made” against tax increases, Graham said.

Such boldness is rare in Washington. That truth is repeatedly proven when talk turns to the president’s health law.

Nearly every Republican in Congress has pledged to repeal the law, and a GOP-run Senate would likely join the House in passing bills to do that. Obama would veto them, a point that would seem self-evident.

Yet no less a politician than Senate GOP Leader Mitch McConnell of Kentucky ran afoul of conservative activists when he told Fox News that Obama obviously “is not going to sign a full repeal.” McConnell said, however, that Congress may try to peel off specific pieces, such as the tax on medical devices.

Conservatives’ howls forced McConnell’s Senate staff to issue a statement saying he “is and has always been committed to the full repeal of Obamacare, and he’ll continue to lead efforts to repeal and replace it.”

Such statements extend the endless quarrels over the health law, suggesting how hard it will be for the next Congress — with or without a Republican-controlled Senate — to solve the nation’s big problems.