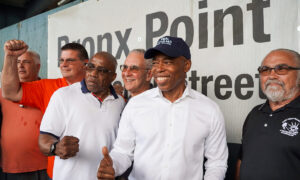 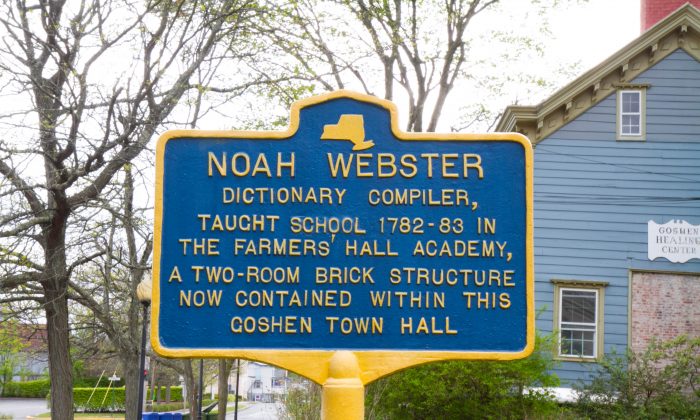 What the Webster Dictionary and Goshen Have in Common

GOSHEN—It is no coincidence that Goshen’s Town Hall sits on Webster Avenue, or that there is a historical marker outside the Town Hall about Noah Webster Jr.

Best known for his work on the Webster dictionary, Webster lived in Goshen between 1782 and 1783 while he taught school at Farmer’s Hall Academy, a building now enveloped by the Goshen Town Hall.

Born in 1758 in what is now West Hartford, Connecticut, Webster’s mother, Mercy Steele was a housewife and his father, Noah Webster, Sr., was a farmer, among other jobs.

Webster studied law at Yale in New Haven but was kicked out of his father’s house with only $20 and was working as an itinerant teacher when he came to Goshen.

It was in Goshen that he started writing “A Grammatical Institute of the English Language,” colloquially known as the blue-backed Speller, selling by some estimates as many as 100 million copies by the 1900’s, making it one of the most popular textbooks in American history. Following it were the “Grammar” and the “Reader,” and later, “An American Dictionary of the English Language.”

It was in a nervous depression that he took on these projects, said Joshua Kendall, author of “The Forgotten Founding Father: Noah Webster’s Obsession and Creation of an American Culture.” Kendall gave a talk entitled “Noah Webster’s Legacy” during Noah Webster Weekend in Goshen May 6-7.

He painted Webster as an educated, prolific writer, a lexicogropher, a journalist, a savvy businessman, a statesman, a religious convert, and an eccentric whose obsessive-compulsive and borderline misanthropic personality made him ideal for the task of dictionary writing.

In 1798 he started the dictionary, which he continued to write for the next 30 years, using it as a kind of therapy to channel the nervous energy from depression and relationship problems he was having.

After the American Revolution ended in 1783, there was the question of which language this new country, with immigrants from a range of linguistic backgrounds, would adopt. One of his greatest legacies, Kendall argues, is that he unified the country with English.

He traveled around the northeast, selling his Speller, which is possibly the genesis of the modern-day book tour, and while he was at it, set up copyright laws in the states where it was sold so his work would not be plagiarized. He also liked to travel to hear how people pronounced words and used them, Kendall said.

His idea about language is that, if people use it, it’s language.
— Joshua Kendall, Author, The Forgotten Founding Father: Noah Webster's Obsession and the Creation of an American Culture

“His idea about language is that, if people use it, it’s language.”

While the Webster dictionary became the most popular, it was not the first popular dictionary in America. He borrowed heavily from Samuel Johnson Jr.’s “A Dictionary of the English Language,” which had about 42,000 words. Webster’s dictionary had about 70,000 words.

While he was a staunch nationalist coming out of the American Revolution and wanted to wean America’s literary dependence from British textbooks, his business sense was more acutely developed than his patriotism.

At one point he traveled to Europe to sit down with some professors from Oxford and Cambridge with the idea that together they could create a universal dictionary of the English language. When he was turned down, he went back to the United States and inserted a patriotic forward in his book to make it an American dictionary.

“He’s willing to give it [his nationalism] up in order to get his dictionary published,” Kendall said. “But then he said ‘Well, might as well be a nationalist, try that one again,’ and it works.”

He not only included words that were singularly American in his dictionary, but he was not afraid to add a few of his own creations, such as “aerodynamics” and “agronomy.”

He was not afraid to add a few of his own creations, such as “aerodynamics” and “agronomy.”

He appealed to George Washington for a blurb in his Speller, and while Washington declined, he did receive Webster when he visited him in Mount Vernon, Virginia with a pamphlet he wrote titled, “Sketches of American Policy” that argued for something like a constitution.

“Washington was not an intellect but he was a very good delegator,” Kendall said. “He then passes on Webster’s Sketches of American Policy to James Madison, his point man in Virginia, and it becomes part of the constitution.”

Webster attended the constitutional convention in Philadelphia in 1787 as a journalist and wrote an essay about it afterwards, “which had a tremendous effect on persuading the country back here to ratify the constitution,” Kendall said.

He also wrote an essay on global warming, and a “short” 800-page book about the history of plagues and pestilential diseases, the beginning of public health as we know it.

“For most human beings, any one of these legacies would be enough for a biography,” Kendall said. “He’s got five or six.”

While in many ways accomplished, ideas like rewriting the bible and creating his own etymology showed how, at some point, he lost touch with reality, contributing to what Kendall calls his “great shrinking reputation.”

He tried to write an etymology to go with his dictionary, and while there were etymologies in those days, “he ignores the literature and he comes up with Webster’s etymology,” Kendall said. After spending eight years writing it, “his publisher wouldn’t go near it.”

Ideas like rewriting the bible and creating his own etymology showed how, at some point, he lost touch with reality.

Kendall said he resisted the temptation to idealize Webster in his biography, because while he could appreciate the many great things the man did, his personality was crotchety, arrogant, and “a little selfish.”

“We like to think of our heroes as George Washington who made an effort to get along with people. That was not Webster,” Kendall said.

Despite his difficult personality, Kendall called him a “multiple founding father,” and said he was glad to see him back in the spotlight for his many accomplishments, if only in Goshen.

This was Goshen’s first Noah Webster Weekend and already organizer Salvatore LaBruna said he is thinking about how to make it bigger and better next year. He said he hopes to make the weekend an annual event.