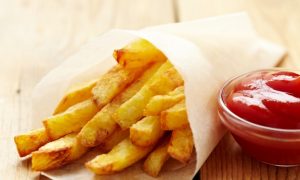 What Exactly Is Monosodium Glutamate (MSG)?

The food additive monosodium glutamate, MSG, is used to enhance, balance, and blend the overall perception of other tastes in food. It stimulates the taste buds and increases saliva production to make flavors ‘pop’. MSG is one of the most controversial food additives. What exactly is it? It is the refined sodium salt form of the amino acid glutamate or glutamic acid.

Since MSG is only 12% sodium by weight versus sodium chloride, which is 39%, some food manufacturers argue that by using MSG, they can use less salt (sodium chloride) in their products. That’s why foods that frequently contain MSG are apt to be salty or savory tasting. They include canned soups, meats, and pasta, prepared dinners and side dishes, dry soup mixes, gravy and seasoning mixes, seasoned salty snacks and crackers, cured meats, smoked meats and sausages, diet foods, freeze-dried foods, frozen foods, prepared snacks, prepared salads, salad dressings and mayonnaise, croutons, bottled and canned sauces, and many seasoning blends. It’s also found in many fast foods and restaurant foods – even high end restaurants use it!

The first reports that linked MSG consumption to the symptoms of a specific illness occurred in 1968 when Robert Ho Man Kwok identified an MSG symptom complex that he called Chinese Restaurant Syndrome.