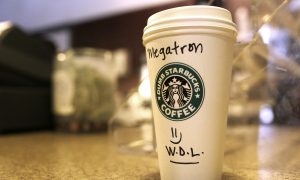 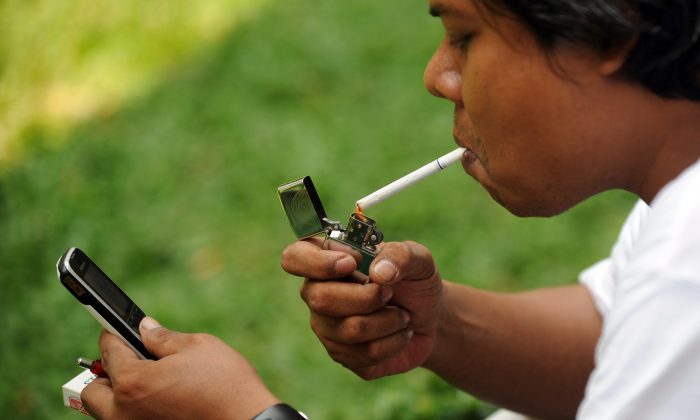 A man lights up a cigarette in Jakarta on Sept. 29, 2010 (Adek Berry/AFP/Getty Images)
Health News

For scientists concerned about radiation from gadgets like cellphones, microwaves, and Wi-Fi, the doubt cast on studies showing their harm to humans is similar to studies done on tobacco in the early 20th century.

The science showing a positive link between cancer and tobacco was deemed inconclusive and not causal enough to be taken seriously throughout the ’20s, ’30s and ’40s.

But as the number of studies increased and the media started to pick up on its hazard to public health in the 1950s, the correlation gradually became accepted, even by the tobacco industry.

The industry adapted, however, introducing “cleaner” cigarettes with low-tar formulas, and released a propaganda campaign to cast doubt on the negative effects of secondhand smoke.

Possibly a similar battle is being fought right now by an international group of 190 scientists who submitted an appeal to the U.N. on May 11 to have electromagnetic fields (EMF) upgraded from the classification of a “possible carcinogen” to a “probable carcinogen.”

Humans have always been subject to magnetic fields, such as the magnetic field of the Earth. But the electromagnetic field from electronics, or EMFs like cellphones, power lines, radios, and computers has dramatically increased in the last several decades.

The scientists’ appeal asks for a precautionary approach to EMFs, citing studies that have already shown conclusive results that EMFs do have a biological effect.

“The signatories of the International EMF Scientist Appeal have all published papers in peer-reviewed journals on the biological or health effects of EMF and noted that the overall weight-of-the-evidence strongly supports greater precaution,” the EMFscientist.org press release stated.

The scientists’ appeal asks for a precautionary approach to EMFs, citing studies that have already shown conclusive results that EMFs do have a biological effect.

They accuse the U.N.’s WHO of double-speak—recognizing that EMFs are harmful to people, yet adhering to the standards set forth by what they call a “self-selected group of industry insiders,” the International Commission on Non-Ionizing Radiation Protection (ICNIRP).

The ICNIRP in its publications does not seem to believe there is a great risk to the environment or human health from EMFs.

The ICNIRP website states, “The overall evaluation of all the research on HF [high frequency] fields as emitted by mobile phones leads to the conclusion that HF exposure below the thermal threshold is unlikely to be associated with adverse health effects.”

It states elsewhere that other studies showing a correlation between EMFs and adverse health impacts are inconclusive because of “reporting biases” and “weaknesses identified in the studies.”

The U.N. has adopted the ICNIRP guidelines even though back in 2001, the U.N.’s International Agency on Research for Cancer (IARC) said, “ELF [extremely low frequency] magnetic fields are possibly carcinogenic to humans, based on consistent statistical associations of high level residential magnetic fields.”

In 2011 it again classified radio frequency EMFs as possibly carcinogenic.”The conclusion means that there could be some risk, and therefore we need to keep a close watch for a link between cellphones and cancer risk,” the IARC stated in a press release.

The U.N. seems to have changed its tune more recently. In an October 2014 release, it stated, “To date, no adverse health effects have been established as being caused by mobile phone use.”

Wi-Fi, Along With Other Electromagnetic Radiation Sources, Could Harm Your DNA

Amazing Cosmos: An Odyssey to Mysterious Objects at the Edge of the Electromagnetic Spectrum

Berkeley City Council is right now considering legislation that would require cellphone retailers to better advertise the risks of cellphones and give ways to mitigate them, such as using headsets that keep the phone away from the body.

Similar legislation was shot down in Maine in April, with legislators concluding that the science was unclear.

Advocates fighting for better preventative measures said the influence of lobbyists from the mobile phone industry is what is keeping legislators from putting consumers first.

The influence and money AT&T has poured into the California Legislature  is well documented, as are the lawsuits by the Cellular Telephone Industry Association (CTIA) when legislation harming its interests are proposed.

In 2010, the CTIA threatened to relocate its annual trade fair out of San Francisco after the city passed a law that would make retailers list the the SAR (specific absorption rate) of each phone model.

The association finally sued the city, saying the law was unconstitutional because all cellphones in the United States are supposed to be safe for consumers, and that only the Federal Communications Commission has the authority to regulate the industry.

The CTIA won the case in 2013, and the city of San Francisco said it was not looking at further legislation that would require SAR disclosure.

Advocates fighting for better preventative measures said the power of lobbyists from the mobile phone industry is what is blocking legislators from taking the issue seriously.

“Science, industry, and government have competing priorities that make decision making about policies regarding electromagnetic fields problematic,” said Mary Redmayne, a professor in the department of epidemiology and preventive medicine at Monash University in New Zealand in a statement.

“Governments need revenue and industry is a lucrative source–scientists call on governments for unrestrained/independent research funding. Who or what will influence policy decisions most?”asked Redmayne.