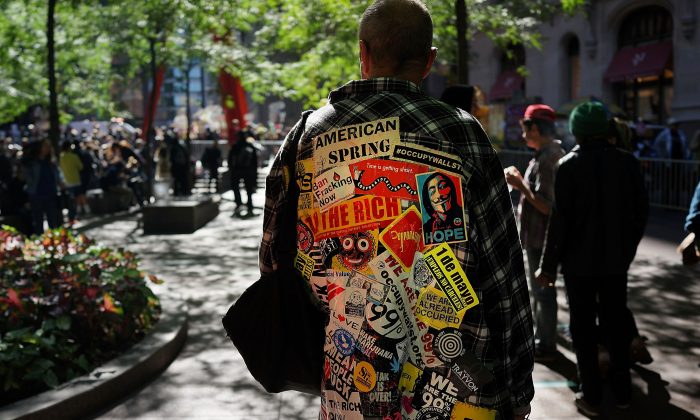 Protesters affiliated with Occupy Wall Street demonstrate at Zuccotti Park in the Financial District on Sept. 17, 2013. Long after the Occupy movement, people still believe in Piketty's ideas and focus on the wrong kind of inequality. (Spencer Platt/Getty Images)
News

NEW YORK—Glimmers of Occupy Wall Street will surface this week in a smattering of cities as activists join rallies for workers’ rights, as they do every year on May Day.

Occupiers probably won’t show up en masse, but they will hold signs and chant, railing against a variety of social and political issues, including one that has recently captured the attention of world leaders: income inequality.

How much credit Occupy deserves for propelling the issue onto the political agenda is a matter of debate. Some economists maintain the same forces that sparked the protests would have eventually caught the attention of world leaders. Others credit President Barack Obama for making it part of his agenda after re-election.

But this much is clear: Occupiers ignited a global conversation, crystallizing for the public a concept long known among policy wonks and making their rallying cry of “We are the 99 percent” part of the global lexicon during the feverish autumn of 2011.

“There’s nothing like a phrase for a bumper sticker to help,” said William Galston, a senior fellow at the Brookings Institution. “Would President Obama have chosen to take up this theme if Occupy Wall Street hadn’t occurred? Who knows? But it didn’t hurt.”

Occupiers took up residence in a small granite plaza near the New York Stock Exchange in September that year and helped spark a movement that spread worldwide. It fizzled out after police broke up encampments that had grown into small cities of their own, splintering into smaller activist groups that now champion various causes.

On Thursday—International Workers’ Day—Occupy activists in New York City will join labor groups for demonstrations, as they have every year since the encampments disbanded. The planned protests include a march to Wall Street and a gathering in Zuccotti Park, the site of the original camp. Protests are also planned in Seattle, San Francisco, Boston, and elsewhere.

Occupy popularized the concept of the financially elite 1 percent, which was based on revolutionary tax research conducted by French economist Thomas Piketty. Using tax records, Piketty and his team had quantified how much money it took to belong to the 1 percent and what share of personal income that group controlled.

The gap between the richest Americans and everyone else is indeed widening, a trend that has emerged gradually over decades but accelerated with the Great Recession. The difference between the income earned by the wealthiest Americans and by a median-income household has risen 24 percent in 30 years, according to the Census Bureau.

For at least a year after Occupy’s demise, there was little talk of the issue, a lag some experts believe was intentional.

Back then, many world leaders refrained from aligning too closely with Occupy, whose anarchist message and eccentric tendencies alienated some people. Many Americans as a whole were wary of the “scruffy-looking people” camping out in the street, said Robert Shiller, a professor at Yale University who won a Nobel Prize for Economics.

“Maybe their publicity was useful, but maybe it’s better for the cause that they’re not out there anymore,” Shiller said.

Talking about inequality used to be taboo for major world leaders, relegated to fringe-left academics until that stigma faded a little over a year ago, said Laurence Chandy, a fellow at the Brookings Institution.

“It’s a watershed. And I don’t know why it suddenly became OK for everyone to talk about it,” Chandy said. “But it now seems to be like those organizations, they feel if they’re not talking about this, that they risk either irrelevance or being out of touch.”

Experts said Obama’s entry into the fray was a game-changer that steered the global narrative. At the same time, a drumbeat of reports about worsening income disparity sounded the alarm, with Pope Francis denouncing trickle-down economic theories for espousing an unethical “survival of the fittest” mentality.

The economy itself may have been the driving force behind the rhetoric. When ordinary, middle-class Americans are generally faring well, they tend not to notice how the wealthiest are doing, economists said. But when the economy goes south, so does sentiment toward the rich.

“The big change between 50 years ago and today is, back then we were looking down at the plight of the poor,” Galston said. “Now we’re looking up at the privileges of the wealthy.”