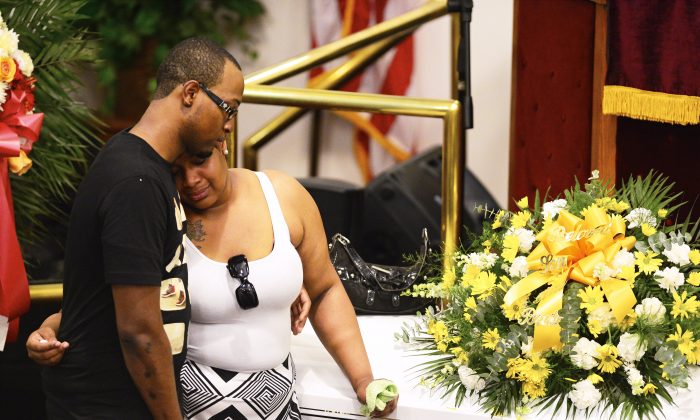 Emerald Garner (R) stands next to the coffin of her father, Eric Garner, during his funeral at Bethel Baptist Church in the Brooklyn borough of New York on July 23. (AP Photo/New York Daily News, James Keivom)
Health

Was a NYC citizen Choked to Death by the Police While NYC Paramedics Stood By?

Four emergency medical workers who were called for a New York City man who died in policy custody after being placed in an apparent chokehold have been banned from responding to 911 calls for the time being, according to an announcement by the Fire Department of New York (FDNY).

The four — a pair each of EMTs and paramedics — who were taken off the city’s emergency response system are the latest public safety employees to face reassignment following mounting questions about the death of NYC citizen Eric Garner. Additionally, two police officers, including the one who had placed his arm around Garner’s neck, have been relegated to desks.

The emergency medical workers’ restrictions are to remain in effect at least until the completion of an investigation into their actions, according to an FDNY spokesman, James Long.

As reported by The Associated Press (AP):

Video of the arrest shot by a bystander shows one officer wrap his arm around Garner’s neck as he is taken to the ground — arrested for allegedly selling untaxed, loose cigarettes — while Garner shouts, “I can’t breathe!”

The fire department disclosed the medics’ reassignment after a second video surfaced showing at least a half-dozen police officers and emergency workers circling a man who appears to be Garner lying on the sidewalk, handcuffed and unresponsive.

Long said the placement of the emergency medical workers on modified duty — which includes a notice in their state health department file that they are not allowed to respond to medical calls — is standard operating procedure for the department when there are questions surrounding their medical response. He added that the suspension was not a reaction to the videos.

The FDNY said the medical workers are employees of Richmond County Medical Center, which is located on Staten Island — the same facility where Garner was transported by ambulance and where he was ultimately pronounced dead. Officials said Garner, a father of six, probably suffered a heart attack but more tests would be needed to determine the cause of death and the manner.

Long told reporters that the fire department initiated action against the hospital’s medical workers because the FDNY supervises the city’s 911 system, which is essentially “a patchwork of public and privately-operated emergency services,” AP noted.

Restrictions on the medical personnel came one day after the NYPD said it had reassigned Officer Daniel Pantaleo, the officer who used what appears to be a chokehold on Garner, as well as another unidentified officer, while prosecutors and internal affairs detectives investigate the incident. Chokeholds are not permissible under department policy.

The department also announced that it stripped Pantaleo, an eight-year veteran of the force, of his gun and badge.

Video of Garner’s battle with police that was obtained by the New York Daily News shows the 6-foot 3-inch, 350-pound man becoming agitated and irate, refusing to be handcuffed.

Garner had been arrested numerous times for selling cigarettes illegally in recent years. He told the officers who were confronting him that he had not done anything wrong, according to a video of the arrest.

“Every time you see me, you want to mess with me. I’m tired of it. It stops today,” Garner shouts in the video. “I’m minding my business. Please just leave me alone.”

Then, as four officers approach and bring him down on the sidewalk, Garner — who has asthma — begins to gasp, “I can’t breathe! I can’t breathe!” One officer is seen on the video using his hands to push Garner’s face into the sidewalk.

The second video, which was likely shot shortly after Garner was handcuffed, shows him lying motionless on the sidewalk, apparently unresponsive. More than three minutes into the video, medics arrive and one of them checks Garner’s pulse. He is then lifted onto a gurney and taken to a waiting ambulance some two minutes later.

A bystander asks why no one is performing CPR, and one officer responds, “because he’s breathing.”