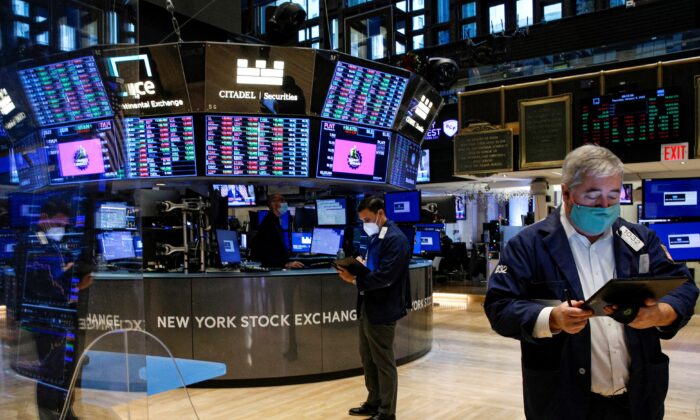 Traders work on the floor of the New York Stock Exchange (NYSE) in New York on Jan. 6, 2022. (Brendan McDermid/Reuters)
Stocks

NEW YORK—Wall Street on Friday wrapped up the first week of the new year with daily and weekly losses as investors worried about looming U.S. interest-rate hikes and unfolding Omicron news.

The Nasdaq posted its biggest weekly percentage fall since February 2021 and led declines for the day in the major indexes. Stocks fell on Friday after the December U.S. jobs report missed expectations but was still seen as strong enough to keep the Federal Reserve’s tightening path in place.

Friday’s Labor Department data showed the U.S. jobs market was at or near maximum employment even though employment rose far less than expected in December, when there were worker shortages.

On Wednesday, minutes released of the Fed’s Dec. 14–15 policy meeting showed officials at the U.S. central bank viewed the labor market as “very tight,” and signaled the Fed may have to raise rates sooner than expected.

“The investor takeaway is that the labor market continues to be tight despite the headline miss,” said Michael Arone, chief investment strategist at State Street Global Advisors in Boston.

“Investors are concerned the Fed will be more aggressive than expected.”

Consumer discretionary and and technology sectors led the way lower on the S&P 500 on Friday. Big tech companies have benefited from low interest rates.

On the flip side, the S&P 500 financials sector and banking index extended recent gains and reached record closing highs. The bank index rose 9.4 percent for the week, registering its biggest weekly percentage gain since November 2020.

Banks have risen with U.S. Treasury yields, with the U.S. benchmark 10-year yield soaring to a two-year high on Friday on the outlook for Fed rate hikes.

“The sentiment has turned negative,” said Jack Dollarhide, chief executive officer of Longbow Asset Management in Tulsa, Oklahoma. “Right now the market is nervous and in the mood to sell at the first hint of bad news.”

Rising cases on the Omicron variant of the coronavirus also caused investor jitters this week.

Investors have been rotating out technology-heavy growth shares and into more value-oriented shares, which they think may do better in a high interest-rate environment.

The S&P 500 energy sector gained sharply for the week, rising 10.6 percent in its best week since November 2020.

“Meme stock” GameStop Corp jumped 7.3 percent after the video game retailer said it is launching a division to develop a marketplace for non-fungible tokens and establish cryptocurrency partnerships.

Advancing issues outnumbered declining ones on the NYSE by a 1.01-to-1 ratio; on Nasdaq, a 1.38-to-1 ratio favored decliners.

Volume on U.S. exchanges was 10.21 billion shares, compared with the roughly 10.4 billion average for the full session over the last 20 trading days.