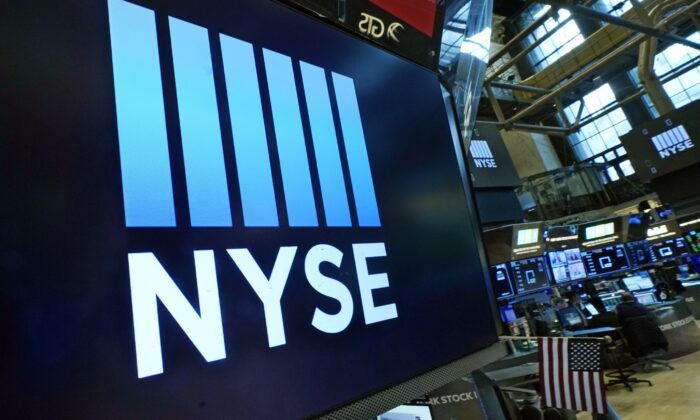 The New York Stock Exchange logo adorns a trading post on the floor of the Exchange in New York on March 16, 2022. (Richard Drew/AP Photo)
Markets

The benchmark index closed 1.7 percent higher, for a 3.3 percent weekly gain. The S&P 500 hadn’t posted such a good stretch since November.

The cooler-than-expected inflation readings have bolstered hopes among investors that inflation may be close to a peak and that the Federal Reserve could less aggressively hike interest rates, its main tool for fighting inflation.

“The data that we’ve gotten this week has all been consistent with the idea that we’re in the midst of peak inflation rates on a month-to-month basis,” said Scott Ladner, chief investment officer at Horizon Investments. “And that’s something that we’ve been waiting to see for months now. And it looks like, if that’s the case, then we’ve probably also seen peak Fed hawkishness.”

Small-company stocks also made strong gains in a sign that investors are confident about the economy. The Russell 2000 rose 41.36 points to 2,016.62.

Around 95 percent of the stocks in the S&P 500 rose, with technology companies driving much of the rally. Chipmaker Nvidia rose 4.3 percent.

The central bank has been raising interest rates in the hopes of slowing the economy and cooling the hottest inflation in four decades, but investors are worried that it could hit the brakes too aggressively and steer the economy into a recession.

On Friday, a survey by the University of Michigan showed that consumer sentiment is stronger than economists expected. Still, inflation remains painfully high. That means the Fed is likely to remain on course with its rate hikes until it is certain that prices have peaked and are easing.

The Fed’s last two increases were by 0.75 percentage points. Traders now see about a 60 percent chance that the central bank will raise overnight interest rates by half a percentage point at its next meeting.

“The market’s strength is based on the assumption that inflation peaked and the Fed can relax, but that may be a bit too complacent,” said Liz Ann Sonders, chief investment strategist at Charles Schwab.

The yield on the 10-year Treasury fell to 2.84 percent from 2.88 percent late Thursday. It remains below the two-year yield. That’s an unusual inversion of the expectation that borrowing money for a longer period should cost more than a shorter period. When investors demand a higher return for a short term like the 2-year than a longer one like 10 years, it’s viewed by some investors as a reliable signal of a pending recession. The economy has already contracted for two consecutive quarters.

Investors can also assess the health of the housing market when they get a report on home sales for July and the latest earnings from Home Depot.