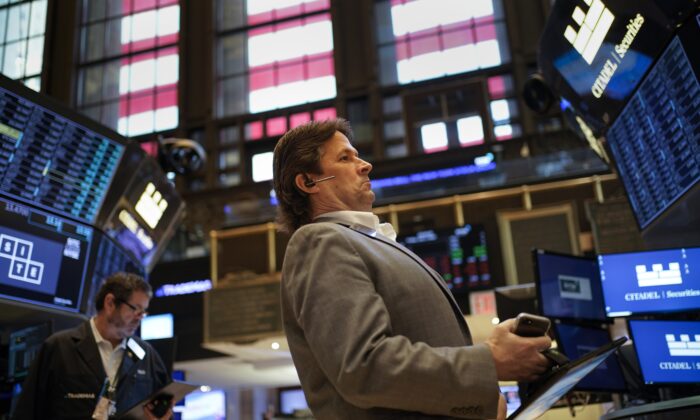 Traders work on the floor at the New York Stock Exchange in New York on July 1, 2022. (Seth Wenig/AP Photo)
Markets

Stocks on Wall Street shook off a downbeat start and ended broadly higher Friday, though the rebound was not enough to erase their losses for the week.

The S&P 500 rose 1.1 percent after having been down 0.9 percent in the early going. The gain snapped a four-day losing streak for the benchmark index, which still posted its fourth losing week in the last five.

The Dow Jones Industrial Average rose 1 percent, while the tech-heavy Nasdaq gained 0.9 percent after a sell-off in technology stocks eased.

The latest choppy trading comes a day after the S&P 500 closed out its worst quarter since the onset of the pandemic in early 2020. Its performance in the first half of 2022 was the worst since the first six months of 1970.

The S&P 500 has been in a bear market since last month, meaning an extended decline of 20 percent or more from its most recent peak. It’s now down 20.2 percent from the peak it set at the beginning of this year.

The market’s deep slump this year reflects investors’ anxiety over surging inflation and the possibility that higher interest rates could bring on a recession.

“What we’re seeing today is reflective of really what we’re going to see here in July, which is continued pressure on the markets, unless we see outsized economic reports on jobs or inflation, or some more meaningful change in Fed policy,” said Greg Bassuk, CEO at AXS Investments.

The market’s latest gyrations precede a long holiday weekend. Financial markets in the U.S. will be closed on Monday for Independence Day.

Wall Street remains concerned about the risk of a recession as economic growth slows and the Federal Reserve aggressively hikes interest rates. The Fed is raising rates to purposefully slow economic growth to help cool inflation, but could potentially go too far and bring on a recession.

Economic data over the last few weeks has shown that inflation remains hot and the economy is slowing. The latter has raised hopes on Wall Street that the Fed will eventually ease off its aggressive push to raise rates, which have been weighing on stocks, especially pricier sectors like technology. Analysts don’t expect much of a rally for stocks until there are solid signs that inflation is cooling.

The latest economic update on Friday for the manufacturing sector shows a continued slowdown in growth in June that was sharper than economists expected. On Thursday, a report showed that a measure of inflation that is closely tracked by the Fed rose 6.3 percent in May from a year earlier, unchanged from its level in April.

Earlier this week, a worrisome report showed that consumer confidence slipped to its lowest level in 16 months. The government has also reported that the U.S. economy shrank at an annual rate of 1.6 percent in the first quarter and weak consumer spending was a key part of that contraction.

Kohl’s dove 19.6 percent after the department store’s potential sale fell apart amid the shaky retail environment as consumers lose confidence and cut spending. Kohl’s had entered exclusive talks with Franchise Group, the owner of Vitamin Shop and other retail outlets, for a deal that was potentially worth about $8 billion.