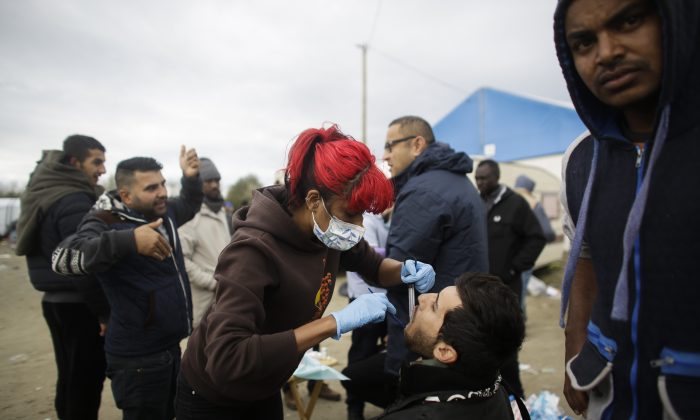 CALAIS, France—Adnan Kurdu has been living in a world of hurt. For months, he has chewed food to the left of his mouth to try to minimize the pain that starts from a right upper molar and seems, sometimes, to shoot down to his feet.

Kurdu finds salvation at one of the improvised clinics that appear from nowhere in Calais’ migrant camp, where medical care for an estimated 6,000 souls depends on volunteers from several countries. After five increasingly graphic minutes seated in a plastic chair at the side of a dirt track, the root of Kurdu’s torment is removed — and the Syrian is all smiles.

“Thank you, thank you,” he repeats in Arabic to a visiting team of four British dentists led by Dr. Raid Ali.

A half-dozen patients who have just witnessed Kurdu’s extraction wait their turn to have abscesses and cavities treated. Soon, a tray of bloodied forceps and other single-use implements is full, and Ali’s team must find somewhere outside the camp with mains-supply electricity to run their sterilizer.

Ali, a 42-year-old Baghdad native who runs three dental practices in Wales, has made the 10-hour, 870-kilometer (540-mile) round trip from Cardiff four times in recent months to mount two-day weekend clinics that stop only when his equipment stockpile is exhausted.

Nearby, the French charity Doctors of the World has built a wooden-hut clinic where patients receive pain relief and treatment for parasites and other ailments, cuts and simple bone fractures. The latter are common as people attempt to board moving trains and trucks at night.

More specialized care requires an uncertain drive to Calais’ hospital, 2 kilometers (3 miles) southwest. Ambulances refuse to enter the camp, citing potentially dangerous crowds and the chance of getting stuck in narrow, bumpy mud paths. They will collect patients only on bordering paved roads.

As Ali speaks, a delirious man suffering from suspected kidney stones is carried by two comrades toward the dental clinic, only to be told in Arabic they are not physicians. A passing charity van is commissioned on the spot as an emergency shuttle. The man moans as his wobbly head slumps onto the dashboard.