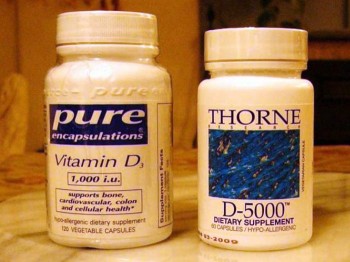 By Ian Ritz
Print
The Alzheimer’s Association recently presented the results of multiple long-term studies that observe different behaviors associated with a reduction of symptoms of the disease.

The consumption of Vitamin D and antioxidant-heavy substances such as tea have been associated with positive brain activity in Alzheimer’s patients.

Positive changes in brain activity were also associated with patients who participated in regular physical activity. The information was unveiled at the group's International Conference on Alzheimer’s Disease (ICAD) in Hawaii.

Doctors cross-referenced the findings from three large long-term studies that show antioxidants in nuts and tea are directly related to increased brain activity.

No conclusive studies have been revealed to show that the amount of activity produced by the change in diet would produce a significant change in brain chemistry to stop the progression of the disease.

Dr. William Thies is the chief medical and scientific officer for the Alzheimer’s Association. He recently shed some light on safe ways to combat the disease.

“Research has pointed us towards a number of factors that may impact our risk of Alzheimer's and cognitive decline, the strongest being reducing cardiovascular risk factors.”

Alzheimer’s ability to disable the minds of patients afflicted with the disease has been a fear for many Americans over the age of 60.

The disease is progressive, and in its final stage usually leaves patients unable to recognize their family members. The ultimate end for most Alzheimer’s victims is a severe state of dementia.

Zaldy Tan, M.D. from Brigham and Women’s Hospital worked on one of the long-term studies that monitored the correlation between physical activity and dementia.

Out of the 242 subjects in the study, 193 developed dementia from Alzheimer’s disease.

“This is the first study to follow a large group of individuals for this long a period of time. It suggests that lowering the risk for dementia may be one additional benefit of maintaining at least moderate physical activity, even into the eighth decade of life,” Tan said.

Vitamin D deficiency was also reported to being directly linked to lowered brain activity among elderly patients with dementia.

The National Institute On Aging estimates 5.1 million people in the United States are living with Alzheimer’s disease.

The Alzheimer’s Association will host next year’s ICAD in Paris.