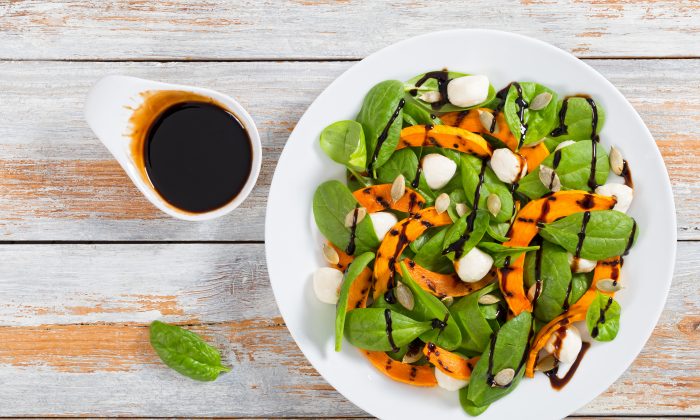 (from my point of view/shutterstock)
Fitness & Nutrition

Vinegar is a unique food. It is tangy and tart, yet has a subtle sweetness that can seriously dress up a salad. But did you know that vinegar can help the body control blood glucose levels, and even reduce Type 2 diabetes?

Research from Greece’s Athens University Medical School tested 11 people with Type 2 diabetes. They were tested twice, with a week between each test. Before the tests, the researchers examined the patients’ plasma glucose, insulin, triglycerides, nonesterified fatty acids (NEFA), and glycerol.

Then they gave each patient either 30 milliliters of vinegar (six percent acetic acid) or a water placebo during a meal. They proceeded to test the patients’ blood parameters every 30 to 60 minutes for the next five hours after the meal.

The researchers found that the vinegar significantly increased the diabetic patients’ uptake of glucose within their cells. They also had reduced blood sugar levels. This was found by testing blood from the radial artery and from the forearm vein.

Herbs and Spices That Can Help Regulate Your Blood Sugar

The research also found that the vinegar reduced blood levels of insulin and triglycerides.

The researchers concluded: “Vinegar’s effect on carbohydrate metabolism may be partly accounted for by an increase in glucose uptake, demonstrating an improvement in insulin action in skeletal muscle.

This point is critical. The reduced levels of insulin in the blood along with reductions in blood glucose levels means one thing: That the vinegar reduced what is referred to as insulin resistance.

What is even more profound is the fact that the vinegar had such an immediate effect. When the researchers tested the patients a second time, but with different people taking the vinegar versus placebo, they found the same results.

A 2010 study from Athens University Medical School also found that adding vinegar to a high-glycemic meal results in reduced blood sugar and insulin levels among diabetics.

The second group was given a meal of the same nutritional value, except that it had a lower glycemic index. This meal included whole grain bread, low-fat cheese and lettuce. Once again they were given the meal on two consecutive days, with and without vinegar.

After each meal, each subject was tested for plasma glucose and insulin levels every thirty minutes for two hours.

However, the difference between the blood sugar levels and insulin levels among the second group—those eating low-glycemic meals with and without vinegar—were not significantly different.

The researchers concluded that: “The addition of vinegar reduces postprandial glycemia following a high-glycemic meal among diabetic patients.”

Other studies have confirmed similar findings for vinegar.

The research also clearly shows one of the health benefits of adding vinegar to our meals. Many health experts have heralded numerous benefits of raw apple cider vinegar, for example.

Why is vinegar such a source of health? Because it has been fermented by probiotic bacteria.