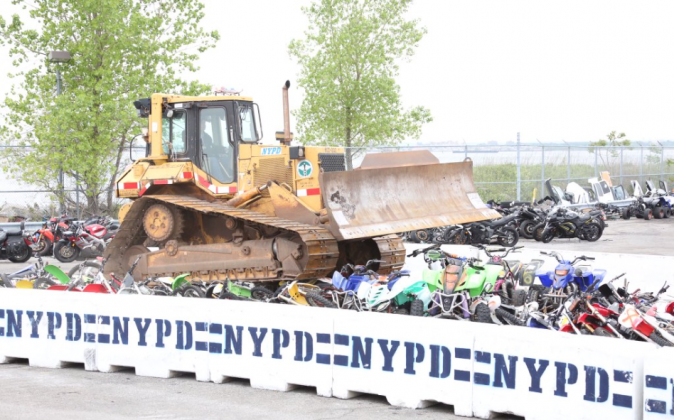 For motorcyclists and off-roaders, it’s very hard to watch; but for those who hate the roar of a dirt bike or illegal quad, you’re in for a treat.

Seizures of illegal motorcycles & ATVs are up 96% in NYC this year. Watch the CRUSH here: https://t.co/qTg7NqBDOJ #UseItAndLoseIt

The NYPD has been cracking down on the usage of illegal and off-road vehicles for on-road purposes for just a few weeks now, and it has been no secret.

Photos, statements, posts to social media, etc. have been flowing in from the police department of prior confiscations, which has claimed the illegal 2- and 4-wheelers will someday meet their maker; well, that someday is today.

On the NYC’s official government Facebook page, the video was posted with this description:

“Mayor Bill de Blasio and NYPD Commissioner Bratton have said repeatedly if you put an illegal all-terrain vehicle, motorbike or scooter on a New York City street, it will be confiscated and one day destroyed.

Well, NYC, today is that day. And you get to watch.

Sit back and enjoy.”

“We want to send out a strong message to the nitwits and knuckleheads who insist on operating these illegal vehicles on the streets,” NYPD Commissioner William Bratton said, according to ABC7.

The NYPD deemed the initiative “Use It and Lose It,” constantly making it known to the public whenever they confiscated a vehicle. It appears many of the operators had violated traffic laws and disregarded the regulations for the vehicles.

As promised, #UseItAndLoseIt. These illegal bikes & the riders menace our communities. Today we certainly CRUSHED it pic.twitter.com/LRahlglP32