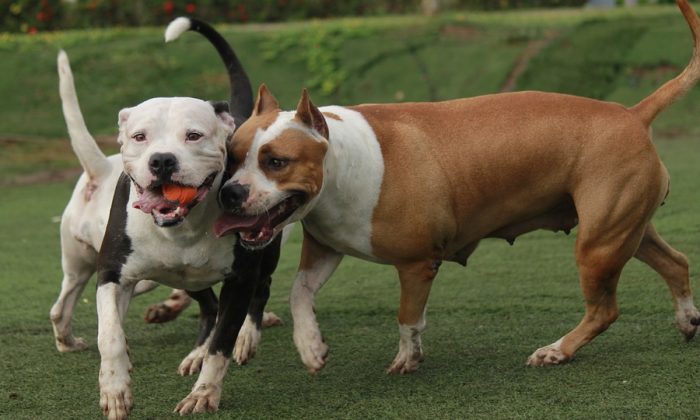 Viral footage has captured the moment pit bulls captured salmon in a river—much to the chagrin of their owner.

The dogs “spotted salmon in the river They instinctively started chasing and catching the fish,” the YouTube user said, indicating they are his dogs.

UPI identified the dogs’ owner as Ken Weiser, who owns dogs, Kaylie and Ellah. He claimed a friend took the two dogs to a river in British Colombia, Canada.

“My friend had a video camera with her so she videoed the entire event. I would not have let them do this as its best to leave the fish to there natural life cycle, But what’s done is done and it will never happen again. So here is a video of the event to be remembered,” the YouTuber claimed.

Weiser then urged others to now alow “your dogs to do this.”

The caught fish were then released back into the river.

“But I still recommend not letting this happen,” said the dogs’ owner.

Users in the comments section were flabbergasted by the dogs’ fishing prowess.

“WOW! I’ve never seen a dog catch anything with its mouth. when I take mine fishing they have their own rods,” one person wrote.

Added another, “Um, who needs a fishing rod and boat? So want to try this with mine.”

One user enthusiastically chimed in: “THIS WAS AMAZING! NO HATE TO YOUR DOGS AT ALL, BRO! THEY ARE CATCHING DINNER FOR YOU! <3 LOVE ‘EM BRO!”

“The best fishers ever they could live in the wild,” said a fourth person.

“This is such a good excersise for the dogs,” wrote one.

“Thank you for sharing this video. This dog is awesome,” said another.

However, the video drew some critical comments from users.