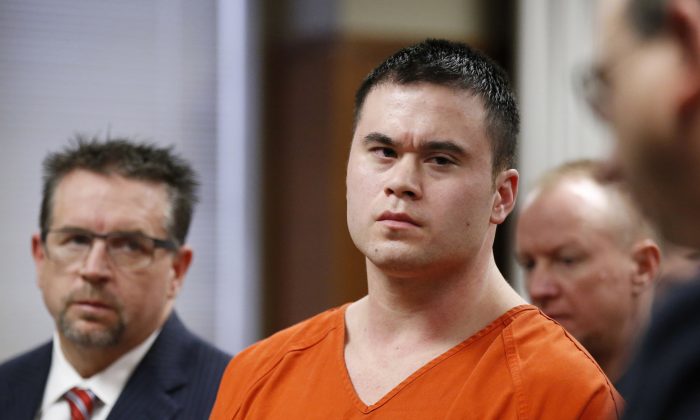 OKLAHOMA CITY—A teenager raped by an Oklahoma City cop on the front porch of her mother’s home says she doesn’t know how to react when she sees law officers now, even though the man who attacked her is going to prison for the rest of his life.

“Every time I see the police, I don’t even know what to do,” the teenager, now 18, told Oklahoma County District Judge Timothy Henderson at Holtzclaw’s sentencing hearing. “I don’t ever go outside, and when I do I’m terrified.”

Another victim — a grandmother in her 50s whose 2014 complaint triggered a police investigation — said her life has been changed forever.

“The stress of the case and fear of being sexually assaulted again has caused an increase in my blood pressure,” Jannie Ligons said. “I so desperately want my life back.”

The Associated Press does not identify victims of sex crimes without their consent and is not naming the teenager, but Ligons spoke publicly about the case and agreed to be identified.

Jurors last month convicted Holtzclaw on 18 counts, including four first-degree rape counts as well as forcible oral sodomy, sexual battery, procuring lewd exhibition and second-degree rape. Prosecutors said since the sentences will be served one after another, Henderson essentially imposed a life sentence. Jurors acquitted Holtzclaw on 18 other counts.

Holtzclaw has maintained his innocence, and his lawyer Scott Adams said he intends to appeal.

Oklahoma County District Attorney David Prater said Holtzclaw was not a law officer who committed crimes, but rather “a rapist who masqueraded as a law enforcement officer.”

“If he was a true law enforcement officer, he would have upheld his duty to protect those citizens rather than victimize them,” Prater said.

An Associated Press examination last year found that about 1,000 officers in the U.S. lost their licenses for sex crimes or other sexual misconduct over a six-year period.

Those figures, too, are likely an undercount, because not every state has a process to ban problem officers from law enforcement. In states that do decertify officers, reporting requirements vary, but the AP’s findings suggest that sexual misconduct is among the most prevalent complaints against law officers.

Holtzclaw’s case drew attention among civil rights activists. All of the victims were black; the jury appeared to be all-white; and Holtzclaw is half-white, half-Japanese and the son of a longtime Enid, Oklahoma, police officer. Several African-American leaders in Oklahoma City attended the trial and were present for Thursday’s sentencing.

Benjamin Crump, a prominent civil rights attorney representing several of the women in planned civil litigation against the city, said the convictions and sentence should send a message to the rest of the country that victimization of black women won’t be tolerated.

“Every one of these women, from the 17-year-old teenager to the 57-year-old grandmother, … they survived a horrific experience,” Crump said. “Hopefully, this is an example for the rest of America to follow, right here in Oklahoma. We stopped a serial rapist with a badge when everyone else had doubt.”

During the monthlong trial, 13 women testified against Holtzclaw, and several said he stopped them, checked them for outstanding warrants or drug paraphernalia, and then forced himself on them.

Holtzclaw’s attorney had described the former high school and college football star from Enid and Eastern Michigan University as a model officer whose attempts to help the drug addicts and prostitutes he came in contact with were distorted. Adams also attacked the credibility of some of the women, who had arrest records and histories of drug abuse, noting that many didn’t come forward until police had already identified them as possible victims after launching their investigation.

Thursday’s hearing was delayed by a few hours as Holtzclaw and attorneys met with the judge over the defense’s request for a new trial or evidentiary hearing, but after hearing testimony from another officer, Henderson rejected the request and moved on to witness statements.