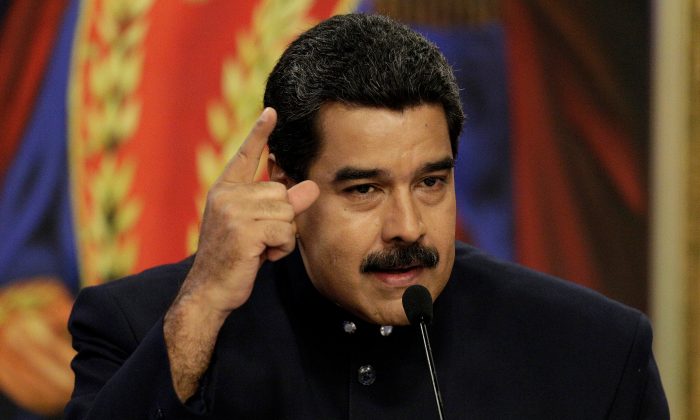 Venezuela's President Nicolas Maduro talks to the media in front of images of Venezuela's national hero Simon Bolivar, during a news conference at Miraflores Palace in Caracas, Venezuela on Aug. 22, 2017. (REUTERS/Marco Bello)
Americas

CARACAS—Venezuelan President Nicolas Maduro said on Sunday, Nov. 12, the country would never default on its debt, a day before debt talks with creditors that will be overseen by two officials under sanction by the United States.

“People have bet on Venezuela declaring default – never,” Maduro said during his weekly Sunday broadcast. “Default will never reach Venezuela. (We) will always have a clear strategy and right now that strategy is to renegotiate and refinance the foreign debt.”

The talks are aimed at beginning to restructure about $60 billion in bonds.

U.S. sanctions have made it practically impossible for Venezuela to refinance debt because U.S. banks cannot buy newly issued Venezuelan bonds. Restructuring talks are equally problematic because the sanctions bar investors from dealings with several officials on the newly appointed debt commission.

Maduro’s vow to restructure and refinance in such an environment has left investors wondering if he is, in fact, preparing the groundwork for default.

“Tomorrow we begin the first round of renegotiation and refinancing of Venezuela’s debt. It will be presided by our companion Tareck El Aissami … and the presidential commission that I have assigned to this task,” he said.

He said 414 investors had confirmed their attendance, describing that as “91 percent of all holders of Venezuelan foreign debt.” That figure seemed to contrast with the overwhelming response of investors contacted by Reuters, who said they were unlikely to attend.

Market sources said last week they had been told that officials sanctioned by U.S. President Donald Trump’s administration would not appear at the meeting.

Investors last week were optimistic about the meeting.

Bonds issued by Venezuela and state oil company PDVSA rallied on Friday as efforts to keep current on obligations fueled optimism ahead of the meeting.

Even though state-run power utility Corpoelec was declared to be in default on Friday for failing to make an interest payment on time, investors were heartened when the company said it had sent the money.

Maduro on Sunday said Corpoelec had indeed paid but that banks have been sabotaging such transfers, echoing frequent accusations that the country is besieged by an “economic war.”

“What happens is that international banks hide the funds that have already been deposited – they hide them,” Maduro said. “Citibank, you gangsters at Citibank, you have tried to do damage to our country on various opportunities.”