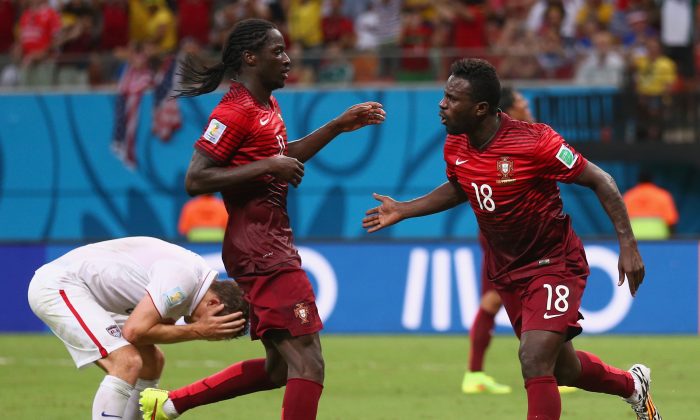 Varela equalized for Portugal against USA in stoppage time of a World Cup 2014 Group G game.

Here is an Associated Press article of USA and Portugal.

US can clinch advancement with win over Portugal

MANAUS, Brazil (AP) — Moths and mosquitoes circled when the United States took the field for practice Saturday evening at Arena da Amazonia, a 40,000-seat stadium built in a remote area of the rainforest where the Rio Negro meets the Amazon.

And as the Americans stretched in the heat and humidity in their final training session before Sunday’s World Cup game against Portugal, a double rainbow shimmered — said by some to herald an occurrence with great meaning.

With a win over the Portuguese and reigning world player of the year Cristiano Ronaldo, the U.S. would accomplish a pair of American firsts: reaching the knockout stage of consecutive World Cups and advancing with a game to spare.

The Americans opened with a 2-1 win over Ghana on Monday behind John Brooks’ 86th-minute goal, while Portugal dropped an embarrassing 4-0 defeat to Germany. When Ghana and Germany tied 2-2 on Saturday, the U.S. was suddenly in position to clinch advancement with a win Sunday.

“That’s a good result for us, to know that if we can win, we take care of business, the rest is history,” goalkeeper Tim Howard said.

A victory over the fourth-ranked Portuguese would mean the U.S. could then win the group with a tie against Germany next week. Klinsmann, a former star striker and coach for Germany, was so excited to watch the end of Saturday’s game that he ran out of his own news conference after about five minutes, took in the final moments, then returned to answer more questions.

“It just confirms what we all knew from the beginning on, that it’s a very, very difficult group,” he said. “It’s a huge opportunity tomorrow here in Manaus, and we will definitely go for it.”

The Americans needed a shot in the arm for this match — up to five inoculations per player, to be precise, for protection against typhoid, yellow fever, tetanus, hepatitis A and influenza after they started training last month in California. Players also were offered medication to prevent malaria, the mosquito-borne infectious disease, but all 23 declined.

“It’s a World Cup,” Chris Wondolowski said. “It doesn’t matter what’s going into your body or how hot it will be.”

After making the 1,680-mile flight from their base in Sao Paulo, the Americans found themselves in typical weather for the first day of winter: The forecast was for 80 degrees (27 Celsius) at the start of the game with high humidity that will make it feel more like 90 (32 Celsius). AccuWeather said there was a chance of a thunderstorm early in the game.

The $290 million stadium, in a city with no first-division clubs that is accessible only by airplane and boat, was designed to resemble a native straw basket and filled with orange and yellow seats specially constructed to withstand sunlight just 3 degrees south of the equator. It figures to be filled with thousands of American fans who have made the trek — the streets were filled with people in red, white and blue Saturday.

U.S. captain Clint Dempsey will play after his nose was broken against Ghana, and he is unlikely to wear a protective mask. Forward Jozy Altidore, who strained his left hamstring, will miss the game and be replaced by Aron Johannsson, Wondolowski or a fifth midfielder.

Portugal is even more beat up and might have only 18 players available. Defender Pepe is suspended, and right back Fabio Coentrao, goalkeeper Rui Patricio and forward Hugo Almeida are hurt. Defender Bruno Alves is banged up and uncertain.

Ronaldo, the world’s top player in 2008 and 2013, has been slowed by tendinitis in his left knee. He trained Saturday with a brace, and teammate Raul Meireles expects him to play against the Americans, who upset Portugal 3-2 in their 2002 World Cup opener.

“He’s strong. Physically he’s a fast runner,” said Howard, Ronaldo’s former Manchester United teammate. “He’s the best in the world with the ball at his feet. Good striker left and right foot. Dominant in the air. The list goes on and on.”