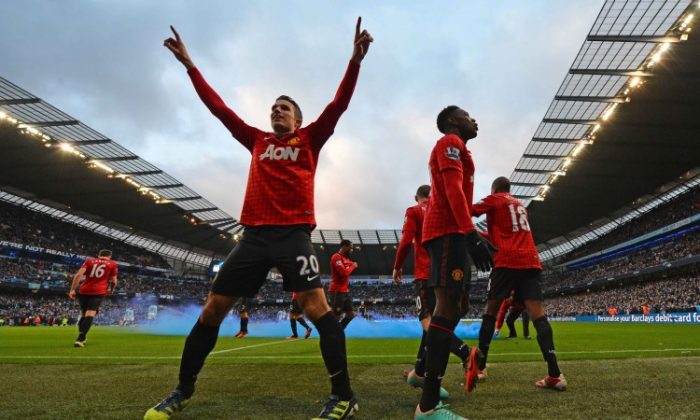 Robin van Persie marked his Manchester derby debut with a sensational injury-time winner as Manchester United squeaked out a 3–2 victory over Manchester City at the Etihad Stadium on Sunday.

It was as Wayne Rooney put it when interviewed by Fox Sports after the game, “A bit of magic and we got the three points.”

United’s win ended City’s 37-game Premier League unbeaten run at the Etihad Stadium, as well as their undefeated record in the league this season.

Rooney himself played a major role in proceedings with a pair of unanswered first half goals that looked to have set the Red Devils on course for a comfortable win.

Rooney has now scored 10 goals in Manchester derby matches in all competitions. He first equaled and then passed Sir Bobby Charlton’s nine goals and will now have his sights set on passing the current record of 10, which he holds jointly with former City stars Francis Lee and Joe Hayes.

But City are not reigning champions for nothing, and they clawed their way back onto level terms in the second half. In fact, they looked the team most likely to snatch a winner until van Persie’s killer blow knocked the stuffing out of them.

United have now won 18 of 31 Premier League meetings between the two clubs with City having won seven.

City manager Roberto Mancini made six changes to the 11 that lost away to Borussia Dortmund in midweek. Gael Clichy and David Silva were both doubtful starters for this one, but were eventually fit enough to take their places.

The Italian gambled on the mercurial Mario Balotelli to start, but with the insurance of Carlos Tevez and Edin Dzeko on the bench, in case the young Italian failed to get his act together, as is sometimes the case.

Jack Rodwell, James Milner, Micah Richards, John Guidetti, and Aleksander Kolarov were all out of contention through injury.

For United, Tom Cleverley had managed to shake off a calf injury, but the real surprise inclusion was Antonio Valencia who had not been expected to be fit for another week or two. Anderson and Nani are both nursing hamstring injuries and will be out of action until after Christmas, though skipper Nemanja Vidic and Shinji Kagawa could return as early as next week.

The Red Devils have conceded the opening goal 15 times in 23 matches this season and with City dominating the opening quarter of an hour, it looked a certainty that the scoring would begin at United’s end.

Yet as is often the case in football, the reality proved to be somewhat different. On 16 minutes, Ashley Young broke away down the left, slipped a pass inside to Rooney whose clever half turn and feint wrong-footed the three defenders in front of him as well as keeper Joe Hart who was rooted to the spot as the England striker slotted the ball just inside the post.

At first glance it looked as if Rooney had mis-hit his shot and just got lucky, but successive video replays suggested he had purposely angled the ball away from Hart.

Following the goal, United suddenly appeared like a totally different team. Having been tentative and on the back foot, their old confidence returned and it came as no surprise when at the 29-minute mark good work between Valencia and Rafael down the right culminated in a simple pass from the Brazilian along the ground into the path of Rooney who was charging in from deep.

The result was a foregone conclusion and United were two up.

Mancini gave Balotelli just five minutes at the beginning of the second period to prove that he was worthy of staying on the field. He did not, and was withdrawn in favor of Tevez.

The uninjured Balotelli headed straight down the tunnel to the dressing room, although he did reappear sometime later to watch the end of the contest.

The most dramatic minute of the match thus far came right on the hour mark. Van Persie turned superbly and fired a snap shot from just inside the area that unluckily rebounded off the inside of the post. Young pounced on the rebound and put it past Hart but was controversially adjudged to have been offside.

Had that goal been given, the match would surely have been put beyond City’s reach. As it was, the Citizens went straight up the other end and peppered United’s goal, but David De Gea, who was excellent throughout, made two sparkling reaction saves.

A third attempt was blocked by a defender before the ball broke to the marauding Yaya Toure who finally pulled one back for his team.

The introduction of Tevez had injected a real sense of urgency into City’s play, which was precisely what his manager had wanted. They were moving the ball much more quickly and giving the United back line a lot more to think about.

The home team finally got their equalizer with just four minutes of regulation time remaining. From a corner, the ball broke to Pablo Zabaleta lurking on the edge of the box and the Argentine defender shot crisply through a forest of legs past De Gea who would have seen it only at the last second.

The momentum was now with City and De Gea kept United alive with a smart save from David Silva on 90 minutes.

But two minutes into stoppage time Tevez felled Rafael just outside the area as the United fullback was motoring in from the right. The resulting free kick was in a perfect position for the left-footed van Persie.

The Dutch master duly did the business with the help of a deflection from the outstretched boot of Samir Nasri that took the ball just out of Hart’s reach.

Sour End to the Match

Regrettably, the disappointment was too much for some City supporters to take and Rio Ferdinand was struck by an object thrown from the crowd, which left him with blood flowing freely from a cut above the leftt eye.

A fan also attempted to invade the pitch and the police were duly brought into action to prevent any further crowd trouble.

It was a sour end to an exciting derby that may not have been a football classic. Indeed, it was quite scrappy at times, but certainly kept everyone on the edge of their seats.

Van Persie was clearly delighted with his contribution, correctly declaring to the Fox Sports interviewer that it was a “really special way to end the game.”

Rooney summed up the feelings of the red half of Manchester stating that it was a “great day for us, especially after what happened last year” when City completed a league double over the Old Trafford club.

Had City avoided defeat they would have equaled their all-time top-flight club record 22-match unbeaten streak (set from 1936 to 1937 under manager Wilf Wild).

It has been a disappointing week for City but that ignominious exit from European competition may yet give them a better chance of defending their domestic crown as the season wears on.

As it is, United are now six points clear at the top and will have gained a huge confidence boost from this victory at the home of their closest rivals.