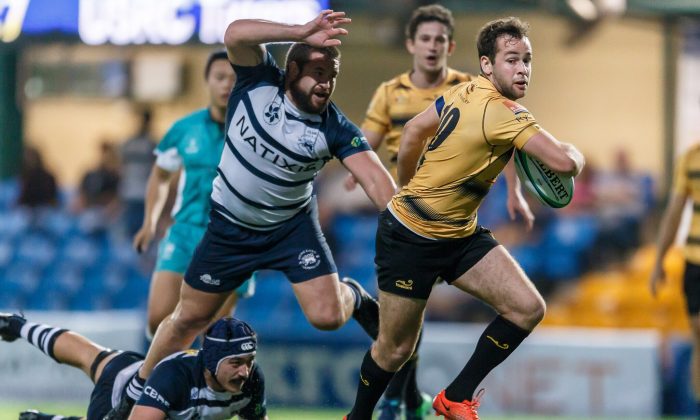 Valley Stump HKCC to Return to the Top of the League

HONG KONG—Société General Valley coasted to a comfortable bonus point victory over Herbert Smith Freehills HKCC, 43-10, on Saturday, in the Hong Kong Men’s Premiership. Both teams were without several first-choice players, but the strength in depth at Valley meant this had much less of an effect on them than HKCC. Valley was more composed, with a clearer game plan, and never looked like losing from the opening minutes of the match.

Valley began sharply: within 2 minutes they already had points on the board. A fine counter-attack straight from the kick-off, with fullback Hugo Stiles, cutting though the HKCC defense to set-up Valley on the HKCC tryline. The resulting scrum, saw the Valley pack dominate HKCC, and Number Eight, Karetai Williams power over for a try. Flyhalf Ben Rimene missed the conversion, and Valley lead 5-0.

HKCC responded, and after 9 minutes had evened the score with a try in the corner. Any sense this was going to be a Valley romp was initially dispelled. A false dawn. On 23 minutes, HKCC had their prop sinbinned, and Valley smelt blood. The disparity between the Valley and HKCC packs was already apparent, but with a man advantage to Valley it had an immediate impact on the scoreboard.

First, scrumhalf Ruan Duploy went over to score, converted by Rimene; later the Valley pack rumbled over for another try. Pushing the scoreline to 17-5. Then a missed kickable penalty by HKCC, that would have bolstered the Cricketers confidence, meant the halftime score stayed at 17-5.

The second half began like the first, with Valley on the scoreboard after only 2 minutes, with the bonus point try. It was another powerplay by the Valley pack, who forced their way over the HKCC line. The conversion was missed, but at 22-5, the match was slipping away from HKCC.

HKCC salvaged a try after 78 minutes to restore some pride, but Valley replied immediately, with substitute flanker Andrew Bridle cutting through the porous HKCC defense to score under the posts. Rimene added the extras and Valley won comfortably 43-10, with a bonus point.

It was a performance that reflected the excellence of the Valley pack, who controlled the outcome of the match, and supremely marshalled by Nick Hewson. All Valley tries came from the forwards, bar one from scrumhalf Duploy, who plays as though he’s both an extension of the pack, as well as linkage to the backs.

The results mean that Valley return to the top of the League with 29 points, followed by Tigers on 28, HKFC on 24, Scottish with 21, Kowloon 13, and HKCC firmly afoot at the bottom with 8.