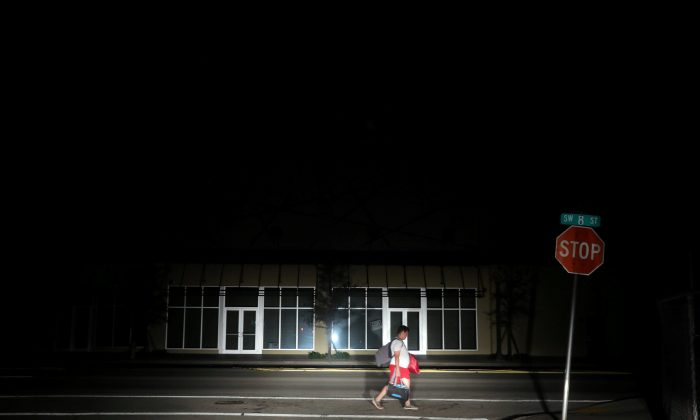 A man walks back home in the darkness as many areas of Miami still without electricity after Hurricane Irma strikes Florida, in Little Havana, Miami, Florida on Sept. 11, 2017. (REUTERS/Carlos Barria)
US

Utilities in Southeast Restore Power to Nearly Half Hit by Irma

Utilities in the U.S. Southeast returned power to almost half of the homes and businesses knocked out by Hurricane Irma, leaving about 4.3 million customers in the dark as of midday Wednesday, in one of the biggest restoration efforts in U.S. history.

The total number of customers still out, representing about 9 million people in Florida, Georgia and the Carolinas, dipped from a peak of more than 7.8 million customers, or over 16 million people, on Monday.

Major utilities in Florida – including NextEra Energy Inc’s Florida Power & Light (FPL), Duke Energy Corp and Emera Inc’s Tampa Electric—have mobilized tens of thousands of workers to deal with the outages after Irma landed early Sunday and carved a destructive path up Florida, which has a population of about 20.6 million.

FPL, the state’s largest utility, said its outages dropped to around 1.9 million customers on Wednesday from a peak of more than 3.6 million on Monday.

Irma, categorized as one of the most powerful Atlantic storms on record when it rampaged through the Caribbean, has killed at least 77 people, including 36 in the United States, officials said.

FPL said on Wednesday it had provided power to some parts of a nursing home where people died after the facility lost electricity during Irma and that the home was not on a list “critical facilities” prioritized for emergency power restoration.

“Parts of the facility itself were energized by FPL, I can’t give you anything more specific than that at this point,” FPL spokesman Rob Gould told a news conference. Two elderly residents were found dead at the Rehabilitation Center of Hollywood Hills and three later died at a hospital.

FPL, like other utilities, follows a plan to restore power to the largest number of customers as quickly as possible.

FPL said after repairing any damage to its power plants and the lines that carry electricity from the generating facilities, the company next restores “critical facilities,” like hospitals, police and fire stations, communication facilities, water treatment plants, transportation providers and shelters.

About 150 of Florida’s nearly 700 nursing facilities do not have power restored, according to the Florida Health Care Association, an advocacy group representing facilities statewide. Locations without power have been flagged to the state to help utilities prioritize their work, the group said in a statement.

“The loss of these individuals is a profound tragedy within the larger tragedy of Hurricane Irma,” the association said in a statement.

Irma hit southwestern Florida on Sunday morning as a Category 4 storm, the second most severe on the five-step Saffir-Simpson scale. It had weakened to a tropical depression on Monday.

More than 60,000 workers from across the United States and Canada were involved in the restoration efforts, including those from the affected companies and other utilities, according to the Edison Electric Institute, an industry trade group.