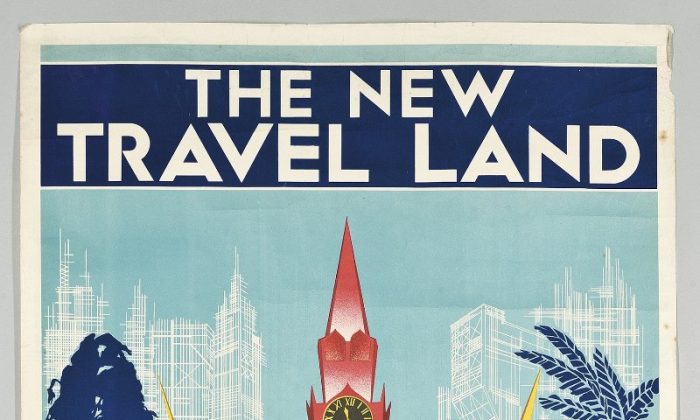 Yesterday I got wind of a wonderful sale of period travel art at world famous auction house Christie’s. Not many realize how travel advertising over the decades has captivated people, and especially nostalgic are the Stalin era travel posters commissioned for Russian Intourist (which still exists) from as far back as 1929. Yes, you read that correctly, the Soviet Union was once touted as T.H.E. travel destination to see.

Christie’s Vintage Poster Sales division held a sale yesterday on lots of items actually commissioned by Joseph Stalin himself for Intourist. For those unfamiliar, this organization (ministry) of Stalin’s government was tasked with promoting travel inside, and from abroad, across Mother Russia. Ironic, beautiful for their sheer creativity, the posters you see in the gallery above represent the USSR in a completely different light. They also convey a sense of Stalin that no one I know of ever revealed, his desire for the Soviet Union to be part of the world community. Isn’t it amazing how the dice determine different fates, and alternative history?

The Vintage Posters sale yesterday auctioned off five examples of ads that were rendered in English, for that consumer market. Those vintage works were designed by various artists, seem almost “other worldly” given World War II and the ensuing Cold War. I particularly like ‘The Transsiberian Express’ – which echoes a truth valid even unto this day. Given recent events, and Russian President Vladimir Putin’s outstretched hand to China, it seems more true than ever Russia is at the center of Eurasian economics.

“>Turning to Christie’s for a moment, I spoke with their staff yesterday about these poster art memorabilia sales. As it turns out, Christie’s leads the way in such sales since 1982. Three times a year the house holds these auctions at the South Kensington saleroom. Interested art fans can find pieces from the late 19th and early 20th Century from the genres of travel, sport and even food and drink.

Like the Stalin pieces you see, many of these auctions feature posters that are avant-garde examples spanning the period. The sales see the Art Nouveau, Art Deco, Secession, Vorticism and even Constructivism expressed in wonderfully creative poster art. What you might call “poster pioneers” such as Henri di Toulouse-Lautrec, Alphonse Mucha, Cassandre, Roger Broders, McKnight Kauffer, and The Stenberg Brothers, are vividly represented in surprisingly affordable pieces. Of course 2000 pounds sterling and more may not seem economical to some, but considering the rarity of these items today, the investment potential is obvious.

Finally, Christie’s even offers guides and help in purchasing and owning art such as these vintage posters. This article spotlights evaluating such posters for the enthusiast, which bidders for the upcoming Ski Sale on 22 January 2015 may want to read. Christie’s told me yesterday that travel is a particularly hot niche for enthusiasts of this type of art is concerned. For me, maybe like some of you, finding Chistie’s a source for such wonderful poster art was somehow a bit of a surprise. As a collector of movie posters for some time, I also began reevaluating the art I myself own, seeing these works of Soviet genius. Anyway, I just thought readers would like to see these melancholy bits of world travel nostalgia from was back in the USSR.

For more information about Christie’s Vintage Poster Sales, you may contact: Nicolette Tomkinson at ntomkinson@christies.com or Sophie Churcher at  schurcher@christies.com.