Use of Grenades, Projectiles, Tear Gas on Jan. 6 Only Enraged Crowd: Police Officer

Effort was like 'shooting zombies,' an officer said. 'We're multiplying them by hitting them.' 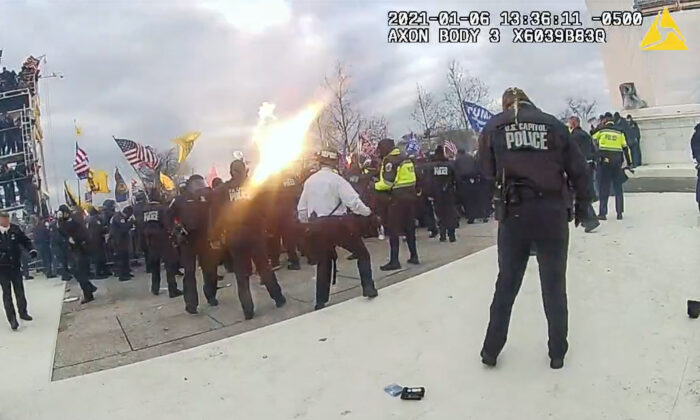 After more than an hour shooting tasers, throwing rubber-pellet grenades, shooting chunks of rubber baton, and tossing a smoke canister at protesters at the U.S. Capitol on Jan. 6, 2021, a District of Columbia police officer concluded that the show of force did little but enrage the crowd.

Nearly two hours of newly-released public body camera footage from the D.C. Metropolitan Police Department (MPDC) Officer Daniel Thau shows how conditions along the police barricades on the west side of the Capitol deteriorated after Thau and colleagues began using munitions and chemicals on the crowds.

The heavy police response at the Capitol began before then-President Donald Trump had finished speaking at the Ellipse, a 45-minute walk away. Most of the huge crowds had yet to start the trek to the Capitol.

Over the next 75 minutes, the west-side crowd became louder and angrier, and eventually pushed its way past barricades, up the stairs, and into the Capitol.

“We’re taking out one and 10 are getting more angrier [sic],” Thau said to Commander John Haines two minutes later. “We’re multiplying them by hitting them.”

Thau and a group of MPDC officers walked toward the west side of the Capitol from the President James Garfield Memorial just after 1 p.m.

About 10 minutes earlier, a crowd had breached a lightly defended barricade near the Peace Monument and streamed across the sidewalk toward the west front of the Capitol.

From the moment the MPDC officers emerged from under the scaffolding on the west-side ground level at 1:12 p.m., they engaged protesters standing along the bike-rack barricades.

Several officers used pepper spray on the protesters. Others relocated sections of barricades to contain the growing crowd.

After surveying the police line, Thau ran up to the scaffolding behind him and shouted, “We need more [expletive] munitions.”

Thau approached a U.S. Capitol Police officer a short time later, and said, “Hey Capitol, we need blast munitions. What do we got?”

A minute later, Thau approached the bike racks with a yellow taser in his right hand. He fired the weapon twice, dropping two protesters to the ground, his bodycam footage shows.

As a group of officers dragged one of the injured men away, Thau approached them and dropped the taser cartridges from his weapon, saying: “I’m out of [expletive] ammunition. [Expletive] it. We got nothing left.”

Over the more than 75 minutes that Thau was behind the police lines at ground level, he was like a one-man strike force. He felled at least four protesters with a taser, tossed countless explosives into the crowd, and fired a munition launcher with a 40 millimeter shell at point-blank range over the barricade.

At 1:16 p.m., Thau told U.S. Capitol Police Capt. Sean Patton, “We need munitions bad.” He then told an MPDC colleague a minute later, “We need a lot of [expletive].”

Thau made another plea for blast devices to a USCP officer. “We’re going to get [expletive] overrun. We need blast munitions immediately,” he said. “We’re gonna lose it. We’re gonna [expletive] lose it.”

Thau approached MPDC officer Tara Tindall, looking for refills. “Tara! Tara! I’m out. I’m out. What else we got?”

“Sting balls. I got stinger rounds,” Tindall said. “I got Skat.” Skat is a trade name for a type of crowd-control projectile shell.

Thau walked up to MPDC Sgt. Ricardo Minier. “Give me your [expletive] taser,” he said, pulling the weapon off of Minier’s vest.

‘I Got Him With a Taser’

Thau strode up to the police line and fired the taser at a man standing in a group a few feet from the barricade. He pointed at the man as he fell to the ground and shouted, “Get back! Get back.”

A protester in the crowd yelled, “What the [expletive] is wrong with you guys?”

About a minute later, Thau approached a gap between two officers along the barricades and fired his taser for the fourth time, striking a man with a beard who was holding a wooden pole. The man then charged at Thau and the two scuffled briefly.

Just over a minute later, a protester just across the barricade shouted at the officers, “Look what you’re doing to us! Are you proud?”

At 1:33 p.m., Thau took a silver canister from MPDC officer Eric Coates. “I’m coming out with smoke,” he said, pulling the pin. “That’s a burner, by the way,” Coates advised.

Moments later, someone in the crowd threw back the smoke canister, which landed behind the officers.

“Eric, do you have any Skat rounds?” he asked Coates.

“I need Triple-Chasers,” Thau said, referring to a pyrotechnic canister that separates into three grenades when deployed.

After a nearby captain advised Thau not to use the Triple-Chaser, he handed it to Coates, took a rubber-ball grenade from him, and tossed it into the crowd.

Thau went back to Coates. “I need more,” he said, retrieving another grenade that he threw into the crowd. Grabbing a third grenade from Coates, Thau threw it toward the crowd. The grenade exploded just above head level.

At 1:42 p.m., Thau tossed two more rubber ball grenades that he retrieved from another officer’s pack. “Alright, we’ve got ourselves a cluster[expletive] right now,” he said.

At 2:12 p.m., Thau was given an orange projectile launcher by Tindall. He loaded it with a rubber-ball shell from Sgt. Frank Edwards, ran to the barricade and fired it into the crowd.

Thau then got a baton round from another officer, stuck the launcher between two officers, and fired at protesters. A baton shell typically holds five projectiles, which can be made of foam, rubber, or wood.

At 2:16 p.m., Thau told Commander Glover it was time for them to retreat. “This is it. We’ve got to call broken arrow on this,” Thau said. “We’ve got to get the National Guard. Honestly. This is it.”

Commander Haines did not like the sound of a retreat. “We can’t lose the steps of the Capitol,” he said. “No! It’s not going to happen.”

At 2:25 p.m., Thau told officer Rich Khoury to fire a gas projectile up into the reviewing stands.

The round misfired, landing in a large group of officers on the ground. A giant cloud of tear gas spread over the entire area.

After Thau helped a colleague who had been maced get up the steps underneath the scaffolding, he told Commander Jason Bagshaw that things looked bleak.

“We’re going to have to make a tactical disadvantaged move out here or we’re going to get people seriously [expletive] hurt, man,” Thau said. “We got 20,000 people out there. We can’t stop them. We need to make a [expletive] decision. We don’t need to get our people [expletive] killed, man.”

Moments later, the crowds pushed past the barricades and headed for the scaffolding. Thau and other officers moved up to the top level. He told a group of officers about to head down not to go.

“I’m going to be as real as I can [expletive] be. We are going to get overrun on the steps of the Capitol,” Thau said. “We’re getting [expletive] hammered. If you guys go down there, the pain compliance is working very minimally.

“There’s 10,000 to 1,” he said. “We are going to lose the [expletive] steps and we’re getting people hurt like a mother [expletive]. Do not go down there because you’re going to get [expletive] up.”