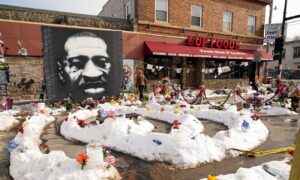 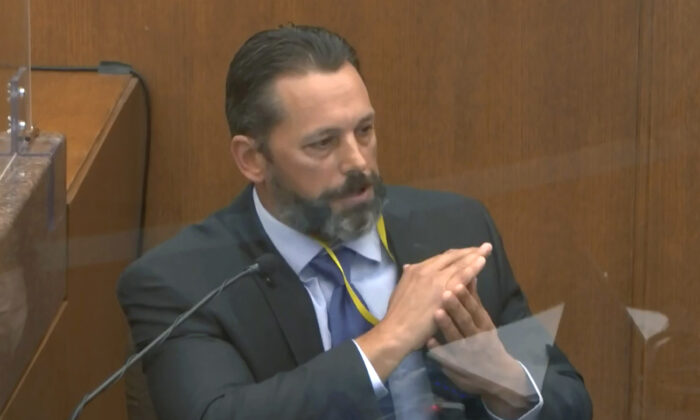 Derek Chauvin, the former Minneapolis police officer charged with murder in the death of George Floyd, received training years ago on how to restrain combative suspects with a knee, but that training instructed officers to “stay away from the neck when possible,” the lieutenant who trained Chauvin testified on April 6.

Department use-of-force instructor Lt. Johnny Mercil became the latest member of the Minneapolis force to take the stand as part of an effort by prosecutors to dismantle the argument that Chauvin was doing what he was trained to do when he put his knee on Floyd’s neck on May 25, 2020.

Chauvin, who was fired following Floyd’s death, was one of four officers to respond to a 911 call concerning the alleged use of counterfeit money at a Minneapolis convenience store last year.

Floyd, who was accused of using the money, resisted officers’ attempts to put him into the back of a patrol car. They then pinned him to the ground. Chauvin knelt on his neck for close to 9 1/2 minutes, by prosecutors’ reckoning, to keep him in place.

Floyd, 46, experienced cardiopulmonary arrest while being restrained by the officers, according to the Hennepin County Medical Examiner’s Office, which determined that the manner of death was homicide.

He had high levels of fentanyl and methamphetamine in his system, according to substance screening, and that drug use, along with a history of heart disease, possibly contributed to the death, Chauvin’s attorney has asserted.

According to testimony and records submitted on April 6, Chauvin took a 40-hour course in 2016 on how to recognize people in crisis—including those suffering from mental problems or the effects of drug use—and how to use de-escalation techniques to calm them down.

Eric Nelson, Chauvin’s attorney, has maintained that Chauvin “did exactly what he had been trained to do over his 19-year career” in the May 2020 incident.

He has offered that Floyd’s history of heart disease, along with the high levels of fentanyl and methamphetamine in his system, is what caused his death, and not Chauvin’s restraining methods.

When shown images from officer body-worn camera footage of moments during Floyd’s arrest, Mercil, who is currently on medical leave from the police department, told Nelson that it showed Chauvin using a “prone hold an officer may apply with his knee.”

Officers are trained in certain situations to place their knee on a suspect’s shoulder or back as part of a restraining technique, Mercil testified, adding, “We tell officers to stay away from the neck when possible.”

Mercil, when questioned about whether he had trained department officers that if an individual is able to talk while in the prone position then they can also breathe, he responded, “Yes, it’s been said.”

Floyd repeatedly told Chauvin “I can’t breathe” when he was pinned down.