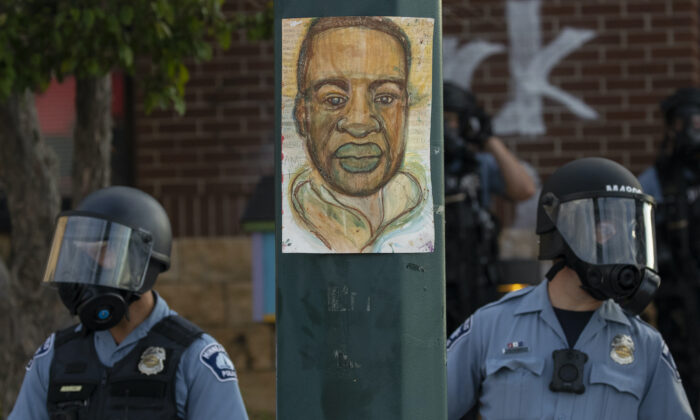 Minnesota police stand outside the department's 3rd Precinct in Minneapolis on May 27, 2020. (Carlos Gonzalez/Star Tribune/AP)
US News

Report notes he had fentanyl in his system, recently used methampetamine, had underlying heart problems
By Jack Phillips
Print

The Hennepin Medical Examiner in Minneapolis released its final public report on the cause of death for George Floyd, saying that manner of death was a homicide, while adding that he recently had used methamphetamine, was under the influence of fentanyl, and had heart issues at the time of his death.

Floyd’s death, which was captured on video, has sparked nationwide protests—some of them violent—and the footage captured by a bystander showed an officer pressing on his neck with his knee for several minutes.

It listed other factors as possibly contributing to his death, including “arteriosclerotic and hypertensive heart disease,” “fentanyl intoxication,” and “recent methamphetamine use.”

The full Hennepin County Medical Examiner Office’s report stated that the manner of death being a homicide is “not a legal determination of culpability or intent,” according to local station BringMeTheNews. There were “no physical findings that support death by traumatic asphyxia or strangulation,” the report said.

An independent autopsy commissioned by Floyd’s family said he had no underlying health problems. It found that the manner of death was “homicide caused by asphyxia due to neck and back compression that led to a lack of blood flow to the brain.”

“Sustained pressure on the right side of Mr. Floyd’s carotid artery impeded blood flow to the brain, and weight on his back impeded his ability to breathe,” a release from Floyd family attorney Benjamin Crump said.

“The independent examiners found that weight on the back, handcuffs, and positioning were contributory factors because they impaired the ability of Mr. Floyd’s diaphragm to function. From all the evidence, the doctors said it now appears Mr. Floyd died at the scene.”

“What we found is consistent with what people saw. There is no other health issue that could cause or contribute to the death,” Dr. Baden said in a statement. “Police have this false impression that if you can talk, you can breathe. That’s not true.”