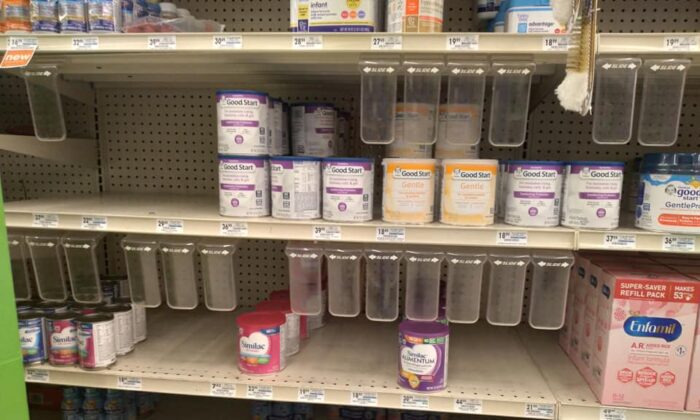 The shelves at a Marc's grocery store, which has started rationing cans of powdered baby formula, in the west Cleveland suburb of Lakewood, Ohio, on May 13, 2022. Customers are limited to three 12.5-ounce cans of Enfamil during the shortage that has been caused by a recall of other brands produced by Abbott Labs in Michigan. (Michael Sakal/The Epoch Times)
Companies

Eight Democrat senators have written a letter to the Secretary of the United States Department of Agriculture (USDA) Thomas J. Vilsack asking him to tackle the baby formula industry’s “alarming level of corporate concentration” amid a shortage of the product.

Such a level of concentration has created a “fragile system” that is unequipped to deal with “shocks in the supply chain,” the senators wrote in the May 13 letter. As a result, low-income families that rely on programs like the Special Supplemental Nutrition Program for Women, Infants, and Children (WIC) get “disproportionately” impacted.

In February, Abbott Nutrition issued a recall of infant formula products like Similac, Alimentum, etc., that were manufactured at its Sturgis plant in Michigan. The recall was issued after four infants who consumed products manufactured at the plant were hospitalized due to infections from Cronobacter sakazakii bacteria, with two of them ending up dead.

In the first week of May, 43 percent of baby formula supplies were out of stock across American stores. The United States manufactures 98 percent of the infant formula it consumes.

Around 50 to 66 percent of all infant formula sold in the country is bought through WIC. In the past three decades, WIC has awarded contracts for sourcing infant formula to just three companies: Abbott Nutrition, Mead Johnson, and Gerber. At present, Abbott is the sole-source WIC provider in 23 states and the District of Columbia.

Moreover, once WIC awards a contract to any company, the brand then gets a boost in non-WIC purchases in that specific state. For instance, when California ended its contract with Abbott and gave it to Mead Johnson in 2007, Abbott’s share of the market in the state went from 90 percent to 5 percent while that of Mead Johnson rose from 5 to 95 percent.

“Under normal circumstances, this does not pose any immediate threats to the ability of families to provide nutrition to their babies and infants, but in the midst of a shock to the supply chain, it is clear that the current level of concentration has created a fragile system unable to meet the needs of vulnerable consumers,” the letter stated.

“This may merit exploring new ways to bolster competition in the market and ensure formula access for WIC participants, including the possibility of multi-source contracts.”

Meanwhile, Abbott is focusing on using its production facility in Cootehill, Ireland, to serve WIC consumers, the company said in a May 13 post.

“Abbott has been working with the USDA and WIC agencies and paying rebates on competitive products in states where Abbott holds the WIC contract when Similac is not available. Abbott will continue to pay rebates for competitive products through Aug. 31,” the company said.

“This means program participants will continue to be able to obtain formula, free of charge whether it is Similac or formula from another manufacturer.”